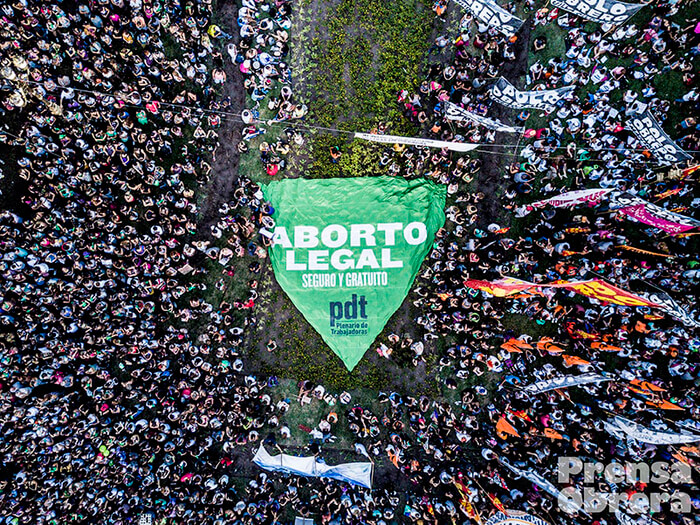 60 Irish MPs and Senators have signed a letter to send to Argentina, calling on the country to legalise abortion in the first 14 weeks of pregnancy.

“We note with concern that Argentina’s criminalisation of abortion forces hundreds of thousands of women each year to undergo clandestine and unsafe abortions, putting their lives and health at risk,” the letter continued.

In Argentina, clandestine abortions are the largest cause of maternal death, with the Ministry of Health’s annual report revealing that in 2016, 17.6% of pregnant women (43 individuals) died due to abortion. It is estimated that around 450,000 illegal abortions take place annually in the country, although due to the illegal nature of the procedure, precise statistics are difficult to attain.

In June, the lower house voted to legalise abortion by a tiny margin, and the vote has since gone forward to the Senate, who have been debating the subject extensively. The final vote will be on Aug. 8, and the letter from Ireland hopes to sway some undecided voters.

“We hope that our experience in Ireland illustrates that legislating to safeguard women’s access to safe and lawful abortion services is both necessary and possible,” the letter continued. “We urge that you, the members of the Argentinian Senate, now seize this momentous opportunity to put an end to the injustices against women and girls by voting in favour of this Bill.”

In May of this year, the Republic of Ireland voted to legalise abortion until week 14 of the pregnancy, despite the traditionally Catholic influences that still have a strong hold over the country. Before this vote, Ireland had one of the most restrictive abortion regulations in western Europe.

However, despite Ireland and neighbouring Uruguay setting an example of free, safe and legal abortion, it appears that convincing Argentinians will not be an easy task.

Juan Carlos Romero from the Partido Justicialista in Salta, announced today that he was going to vote against the legalisation of abortion, despite intimating that he is leaning towards a ‘Yes’ vote.

“I am going to vote prioritising the view of the Salta society, of which the majority are against [the ruling], above my personal convictions,” he said, reported in La Nacion.

In a Salta referendum, 70% of those who took part expressed a desire to keep the current legislation, which criminalises abortion apart from in cases of rape or risk to the life of the mother.

Romero’s vote bumps the Senate’s ‘No’ votes to 36, which equates to half of the Senate, explains La Nacion. However, there will be one senator abstaining and another will be absent, which effectively gives the ‘No’ camp a majority vote.

This doesn’t look optimistic for the green handkerchief-bearing crowds who have taken part in numerous marches and protests since early this year when the debate was opened. However, if the Senate are to vote against the proposal, there is still hope that Opción Córdoba (The Cordoba Option), would allow senators to make changes to the proposal’s text which was drawn up and approved by the Lower House.

If such changes cannot be agreed upon, the pro-abortion campaigners will have to wait until Mar. 1 next year to reopen the debate. However, politicians are likely to be inattentive at this time seeing as the whole country will be engrossed in the 2019 presidential elections.

The presidential elections may already be having an effect on senators’ decisions. Some of the pro-life contingent of Argentina have started mobilising themselves under the slogan #ConAbortoNoTeVoto (with abortion I won’t vote for you). Current President Mauricio Macri has been staunch in his rejection of the new bill and other senators may be voting tactically in this historical debate in order to consolidate support next year.

The pro-abortion camp has received increasing international support, from Amnesty International and Human Rights Watch (HRW), with the latter declaring that illegal abortion is incompatible with Human Rights obligations. This week HRW will speak in front of Brazil’s Supreme Court to give a talk explaining the necessity to legalise abortion.

However, Argentina’s traditionally religious and conservative stance means that although cosmopolitan areas like Buenos Aires are home to many supporters of a free, safe and legal abortion, many of those in provinces across the huge country don’t reflect this view.

Regardless of the result, Argentina’s abortion debate will have significant repercussions and has already sparked debate across the ordinarily pro-life Catholic continent.