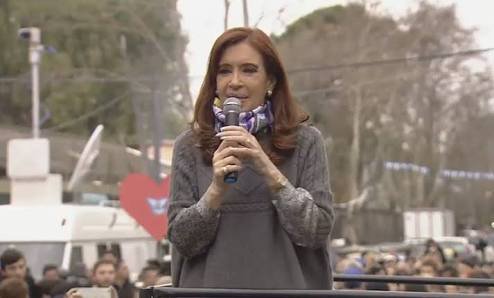 The Notebooks of Corruption case shows no signs of slowing down as Judge Claudio Bonadio processed 42 people last week on corruption charges within the Ministry of Federal Planning. This morning, reported Clarin, lawyers Carlos Stornelli and Carlos Rívolo asked the magistrate to extend Cristina Kirchner’s charges to 913 separate acts of corruption.

Bonadio has accused Kirchner of being the head of the illicit organisation that organised bribes between the Kirchner government and businesses in order to keep public works contracts.
Having been accused of 22 cases of handouts and five of bribery, the lawyers requested that as she acted as the head of the organisation, she should be tried for all of the cases of corruption within the Notebooks scandal. This includes everything that was written by Oscar Centeno in his notebooks as well as information provided by the accused who have negotiated plea bargains.

Clarin affirmed that there were 87 cases of illegal funds being delivered to Kirchner’s house on Uruguay and Juncal, totalling almost US$70 million.

“Cristina Elisabet will have to respond in order with the crimes of illicit association, her role as the leader, in concurrence with passive bribery reiterated in nine hundred and thirteen (913) cases,” read the lawyer’s appeal.

As well as totting up the total number of accusations against the ex-president, Stornelli and Rívolo have calculated more crimes against ringleaders Roberto Baratta and Julio De Vido.

De Vido now has 205 cases of passive bribery against his name and Baratta has 90 cases of accepting acceptance of bribes, as well as four cases of passive bribery. The lawyers have also asked for the detention of businessmen Carlos Wagner and Gerardo Ferreyra in addition to the ex-secretary of Public Works José López and financier Ernesto Clarens, demanding their sentences be made more severe due to their leading roles in the case and should be considered organisers alongside Baratta and De Vido.

“[They] developed activities that promoted the criminal objective of the group and carried out tasks that perhaps would have been difficult to assign to somebody else, making them difficult to replace,” judicial sources told Clarin.

They have asked for more businessmen to be detained, namely Jorge Guillermo Neira, Héctor Javier Sánchez Caballero, Rodolfo Armando Poblete, Héctor Alberto Zabaleta, Francisco Rubén Valenti and Osvaldo Antenor Acosta in relation with the case as well as requesting a deeper investigation into the whole affair. After listening to the confessions of those detained, they want the case to be extended to deal with money laundering as well as the already active cases of corruption and bribery.

Stornelli and Rívolo’s appeal will now be analysed by the Federal Court. Kirchner cannot be held in preventative prison due to her immunity as Senator, and despite Bonadio’s repeated requests to strip her of this, this can only be determined by a favourable vote by the Senate. Thus far, the majority of Senators have stated that they would vote against this measure until a concrete sentence against the ex-president is formalised.