Macri talks Venezuela, Iran and the Falklands at the UN General Assembly 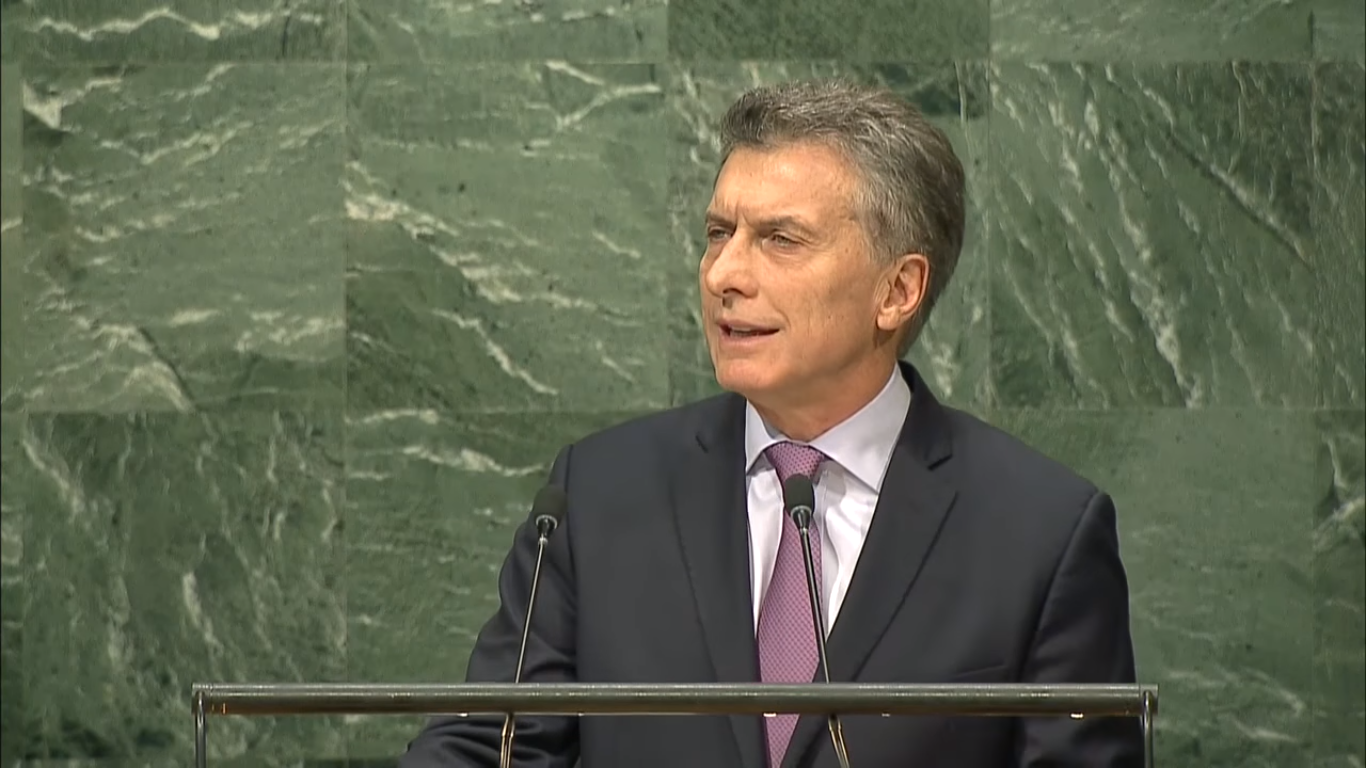 In the shadow of both finalising negotiations with the International Monetary Fund (IMF) and a national strike in Argentina, President Mauricio Macri gave his second speech at the UN General Assembly in New York on Tuesday Sept. 25. The president alluded to Argentina’s economic crisis and expressed preoccupation about Venezuela Furthermore, he asked for collaboration in the AMIA bombing investigation and affirmed Argentina’s sovereignty over the Falkland Islands.

In his 11-minute speech, Macri raised the issue of the ongoing economic and political crisis in Venezuela, and announced that he will file a complaint to the International Criminal Court (ICC) accusing Venezuela of violating human rights. Chile, Colombia and Paraguay have also expressed support for this measure.

He also made a call to Venezuela’s President Nicolas Maduro to accept the humanitarian aid that is being offered by countries in the region, while highlighting that Argentina had welcomed around 130,000 displaced Venezuelans.

“We are part of a regional and broad response that looks to mitigate the difficulties of millions of Venezuelans,” he said.

Almost 25 years after the AMIA bombing in Buenos Aires that left 85 people dead and hundreds more wounded, Macri stated his unrelenting commitment to bringing those guilty to justice.

“Our country will not cease in its objective to interrogate and eventually sentence all the people who are involved in the attack,” he explained. He asked the country to “cooperate with Argentine authorities to allow the investigation of the attack to move forward.”

He also requested that “allied countries” do not receive or protect any Iranians in the country by granting them diplomatic immunity when they have an international arrest warrant out in their name.

Macri staked a firm claim on Argentina’s sovereignty over the Falkland Islands.

“I want to reaffirm once more the legitimate and absolute rights of Argentina over the Falklands,” he stated, an opinion that has historically been the cause for frosty relations between the UK (who currently count Falklands as a UK territory) and Argentina.

However, he went on to suggest there is a “new phase in the relationship” between the two countries, saying that it was based on “mutual trust and a broad and positive dialogue.”

When mentioning his own country’s current situation, the president highlighted his desire for multilateral growth and creating a place for Argentina in the global market. He emphasised the country’s involvement in the Paris Agreement to combat climate change as well as the compromises made in line with the UN sustainable development agreement. However, he didn’t spend too much time on the current economic situation the country is currently experiencing.

“We are going through a process of changes, we decided to move through it with the conviction that we are making the right efforts,” he said. “I know that it’s a big effort, and I want to thank every Argentine person for this.”

“We are working to integrate better among ourselves, and to integrate ourselves more into the world,” he added. “We look to make a positive impact on the international order in the 21st century.”

Today, Wednesday Sept. 26, the country is recovering after yesterday’s national strike and the resignation of the head of the Central Bank Luis Caputo. According to Perfil, Dujovne explained that Caputo’s resignation “wasn’t a surprise” as he already spoken to the president about leaving his post.

In regards to the IMF loan, both Macri and Dujovne have both expressed their optimism about the current negotiations.

“We are convinced that we are arriving at the best agreement possible,” Dujovne said to New York press. “You are not going to hear any precise information from me until we have it.”

The politicians have implied that unless there are complications, the final results of the negotiations will be released on Wednesday.