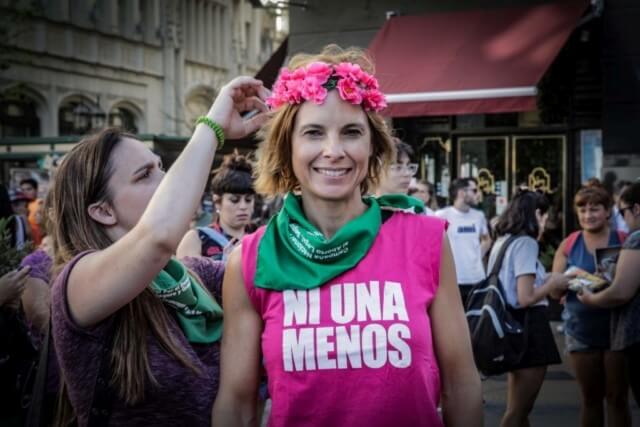 Just over one month after the alleged gang-rape of a 20-year old woman in a Buenos Aires, Argentina suburb sparked a national debate about rape culture, a lawyer for the victim says that the media’s handling of her story has taken a psychological toll.

On February 28 in the trendy Buenos Aires, Argentina neighborhood of Palermo, a young woman was allegedly gang-raped by six men between the ages of 19 and 24 in a Volkswagen parked near a bakery, after they all came out of a nearby nightclub. Two of her alleged attackers played the guitar outside of the vehicle, in what the authorities say was an attempt to drown out the noise coming from inside.

A local businesswoman confronted the men about moving their car and that’s when she saw what was happening inside and intervened. The men were arrested and are currently awaiting trial.

The attack in broad daylight, occuring a week before International Women’s Day, struck a nerve in Argentina, and has sparked a debate about rape culture in the country.

Initially, it seemed as if Argentina collectively condemned the rape.

The Mayor of Buenos Aires, Horacio Rodriguez Larreta, promised that  “the six rapists must feel the full weight of the law.”

Protesting what they believed to be a wider societal problem, a collective of feminist activists called Ni Una Menos staged large-scale protests on March 8. And Argentina’s Minister of Women, Gender and Diversity, Elizabeth Gómez Alcorta tweeted:

“It’s your brother, your neighbor, your father, your son, your friend, your colleague at work. It’s not a beast, it’s not an animal, it’s not a pack with unstoppable instincts. None of the acts that horrify us are isolated. Everyone responds to the same cultural matrix. We need men to be part of the struggle.”

These calls for introspection on how men treat women in Argentinian society, however, quickly received backlash, and the debate became politicized.

Politicians opposed to Minister Gómez Alcorta and the current government said that the attack was an aberrant act by individuals, not an expression of a larger rape culture.

Patricia Bullrich, president of the center-right Republican Proposal political party, said that the actions of “six cowards” had nothing to do with the “millions of young people who study, work and have respectful and loving relationships.”

As more information surfaced about the alleged attackers, discussion on social and traditional media tended to settle into all-too familiar quarrels about class and political division.

Some media reports fixated on the attackers’ social status as middle-class, well educated young people (one alleged attacker was studying architecture at university).

Others brought up the “progressive” political affiliations of the attackers. Perfil reported that one of the defendants had attended workshops on feminism, and described himself a feminist ally. Right-wing pundits emphasized the leftist politics of the accused men.

The number of rapes in Argentina have increased steadily

Putting aside the political debate, the fact is that the number of recorded rapes in Argentina has been climbing steadily. In 2016, Argentina’s Ministry of Security reported 3,721 victims of rape.

And experts say that unreported rape cases increase those numbers. In 2019, a specialized unit from the Prosecutor General’s office that focuses on crimes against women, UFEM, reported that up to 87% of rape victims don’t report the crime to authorities.

A mugshot with accompanying text on a wall nearby warns people to stay away from another violent attacker of women: “Don’t be his next victim.”

While one woman’s horrific victimization has sparked what many call an important national debate about the overall culture of rape in Argentina, lost in the echochamber of political arguments being flung from both sides is how the increased attention has negatively impacted the victim.

Last week, the victim’s lawyer told Télam that the victim is suffering from post-traumatic stress, and in an earlier open letter to the media, the victim wrote that the coverage had increased her trauma because her identity had not been sufficiently protected. Videos in which she was recognisable were widely and repeatedly broadcast.

“Respect for the protection of the victim’s identity is not a favor, it is a right,” she wrote in her letter.