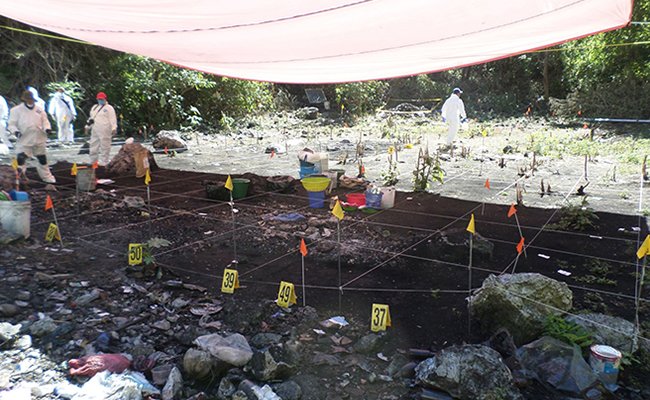 A day after the International Day of Disappeared People, the Argentine Forensic Anthropology Team (EAAF) has slammed claims from the Mexican President Enrique Peña Nieto that falsely revealed the 43 missing students in Ayotzinapa, Mexico had been burnt to death in Cocula.

“Physical evidence from the Cocula dump has found no scientific or objective elements that sustain the incineration of 43 bodies.”

For 34 years, the Argentine organisation has been working relentlessly alongside the families of missing people across the globe and have contributed to the search and identification of a number of bodies before supporting the restitution of human remains. Some of the cases with which they have been involved saw EAAF Anthropologists Patricia Bernardi, Mercedes Doretti and Silvana Turner exhume the remains of the victims of  El Mozote, where 800 civilians were killed in El Salvador, addressing some of the greatest massacres in Latin America’s recent history.

The high-profile Mexican case which the team is currently working on links to the controversial disappearance of 43 students in September 2014. Though many details of the event remain unknown to this day, students from the Rural School of Ayotzinapa were commemorating a 1986 student massacre when events quickly unravelled and the students were attacked, with 43 kidnapped.  Their whereabouts remain unknown although many presume they have been murdered.

The orchestrators of the attack initially pointed to local police who have been connected to criminal organisations, however, eye-witness accounts also suggest other areas of Mexican security, police and military were involved. Many have suggested that the students were eventually passed into the hands of guerrillas. Since 2014, stories of the viciousness of the student attack have grown and a number of mass graves have been located, but the students’ remains have not been identified. The Party of the Democratic Revolution’s reputation has been heavily tarnished over the incident with international outcry at the failure of the Mexican state to bring justice upon the crime.

Branded a crime against humanity by the Human Rights office, the disappearance and apparent cover-ups from leading players called into question the former government’s ability to control crime in a country rife with corruption.

Yesterday, the Mexican president released a video that suggested the historical truth behind the missing students is that their burnt remains are located at the Cocula dumpsite in Mexico. It is a controversial step which went against the relentless campaigning of families as well as the international outcry from humanitarian organisations around the world. The EAAF outright condemned the video as false and have since pointed out that there is no scientific evidence whatsoever that the remains of the students are where the President stated. The Argentine organisation further reiterated its support for the families of the missing students and promised to support the path to justice for the crime.

Enrique Peña Nieto is yet to comment on the backlash to yesterday’s statement.

The Argentine NGO continues to rally support for the families of victims around the world. Argentina and Chile have both suffered oppressive military regimes that have caused thousands forced disappearances, and in many cases, no more was heard from the victims. However, in Chile, justice is coming to some as 29 people will receive US$166,000 from the state in compensation for torture and disappearance during Pinochet’s dictatorship. In Argentina, the famous Abuelas de Plaza de Mayo (Plaza de Mayo Grandmothers) keep up their relentless search for babies and children stolen during their own “Dirty War” military dictatorship.

Mexico is still fighting a war that has not yet ended as the rise in organised crime groups spreads to abductions being carried out across the country. The search for missing people is ongoing, and painful, but the families of the victims have a right to know the truth behind what happened to their loved ones.