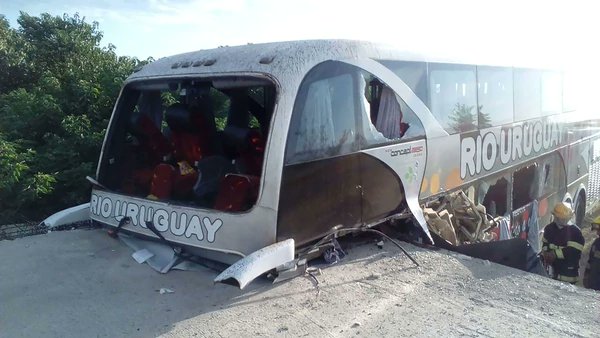 Three people were killed and at least 10 injured at 6:00 am this morning when a school bus transporting a boys football team collided with a bridge on Route 18 in Villaguay, Argentina.

It has been reported by the Argentine news website La Nacion that the bus containing 30 minors and 16 adults, including parents and teachers, was driving from Misiones to a football tournament within the province of Cordoba when the disaster occurred.

According to this morning’s report, the double-decker bus left the highway connecting Paraná with Concordia and travelled for almost 80 meters along the hard shoulder before hitting the Tigrecito bridge that was under construction in the opposite direction.

Though investigations are still underway, it has been suggested that the driver lost control of the vehicle. The well-known bus company, Rio Uruguay, operates from Posadas and has routes all over Argentina. Company representatives have yet to make an announcement regarding the collision.

The names of the victims of this morning’s crash have since been identified through social media reports as the two drivers, Carlos Samuel Décima and Abraham Betancurt, who died at the scene. A third passenger, Adrian Alberto, was later identified as a parent of one of the young players.

Though 10 passengers have been taken to a hospital in Villaguay, it is believed that there are no other serious injuries and everyone has since been removed from the vehicle and awaiting relatives.