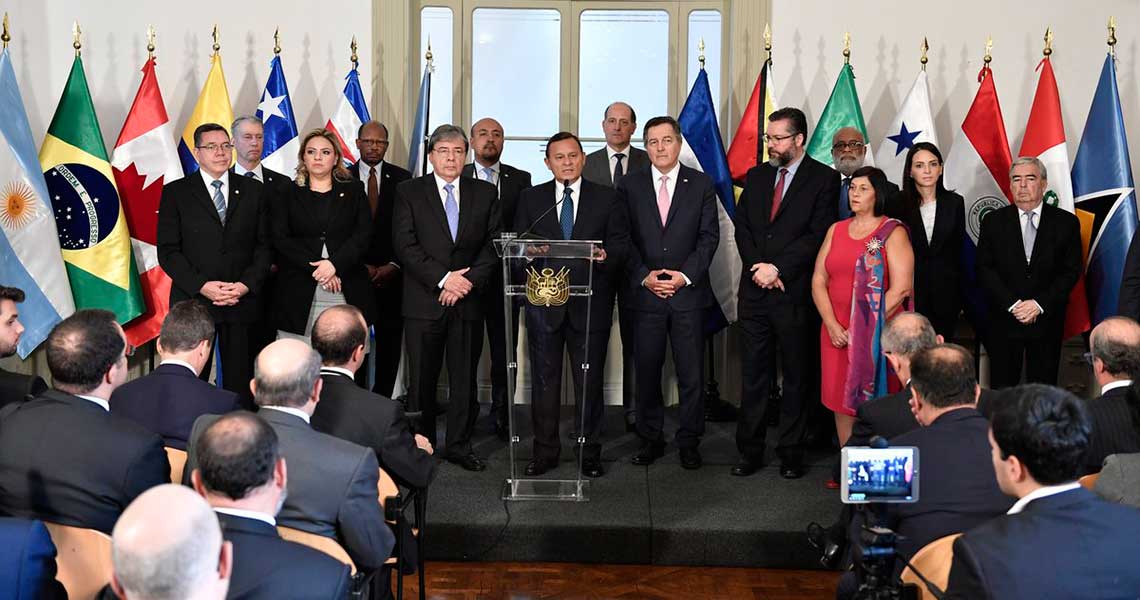 In accordance with the Lima Group’s statement that reiterated a refusal to recognise the Nicolas Maduro’s leadership in Venezuela, Argentina plans to bring in new ways to sanction the Caribbean country.

Maduro is expected to start another term as president on January 10 that would keep him in power until 2025, despite the fact that the election he won in May last year was widely dismissed as illegitimate. The Lima Group has urged the Chavist leader not to take office, and instead officially recognised and supported the leadership of the National Assembly as “a constitutionally and democratically-elected organism in Venezuela.”

The electoral process of 2018 in Venezuela lacks any legitimacy. Therefore, the Lima Group does not recognise the legitimacy of Nicolas Maduro’s new presidential period. We encourage the current Chief Executive to cede power temporarily to the National Assembly.

The communique released on January 4 was signed by Argentina, Brazil, Canada, Chile, Colombia, Costa Rica, Guatemala, Guyana, Honduras, Panama, Paraguay, Peru and Santa Lucia. Mexico was present at the meeting but didn’t take part in the signing as newly-inaugurated president Andres Manuel Lopez Obrador is implementing a non-intervention policy for the country. Although not a part of the Lima Group, Sputnik News reported that US State Secretary Mike Pompeo participated in the meeting via video conference, which has sparked accusations that the Lima Group are taking orders from US President Donald Trump.

The main sanctions that the communique released were to prevent Venezuelan officials entering countries within the Lima Group, to reevaluate the status or level of diplomatic relations with the country, and to suspend military cooperation with the Maduro regime, while calling on the international community to do the same. It also wants other countries to support an International Criminal Court investigation into the possible human rights violations taking place in the country. Venezuela have rejected the communique.

Infobae reported that in accordance with these sanctions, Argentina will stop diplomatic members from Caracas entering the country, as well as requiring an entry visa for all officials of the Maduro regime. Currently Venezuelan citizens do not require a visa to enter the country, but to avoid officials entering on a standard passport, Argentine immigration officials have a list of known officials that they will crosscheck when Venezuelans enter the country.

For staff currently working in the Venezuelan embassy in Buenos Aires, Argentina will not renew their accreditation to stay in the country, which will affect all the 50 members of staff who are lead by Chavist Carlos Martinez.

It is also expected that the Argentine government will aim to reject international organisations giving loans to Venezuela, something Argentina and Brazil have both already done by vetoing a US$500 million dollar loan which had previously been approved by the Development Bank of Latin America. According to Infobae, financial alerts will also be created in banks to keep track of movement between bank accounts held by leaders of the Venezuelan regime.

“This is the time that we have to show proof designed to exert more pressure on those responsible for the Chavist regime that will assume a new mandate which is completely illegitimate,” a Chancellor official explained to Infobae.

The Lima Group has rejected the use of military force as a recourse in the struggle to help the Venezuelan people, and as such is looking for a variety of different ways to express its rejection of the Maduro regime, which has been plagued by economic crisis and the subsequent exodus of millions of people.