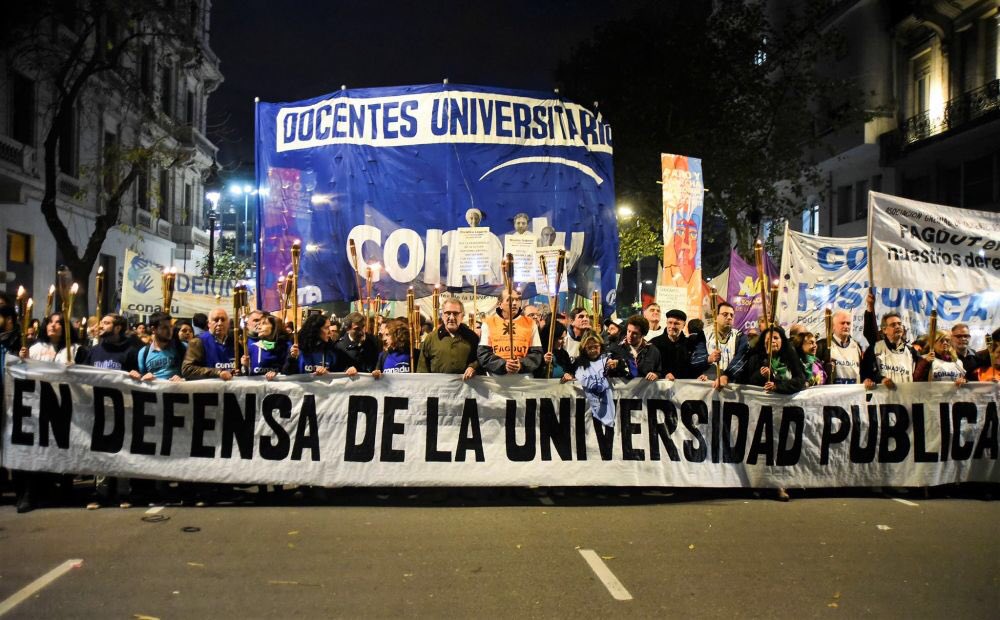 Despite the relentless rain, 100,000 people took to the streets on Thursday evening to protest against the salary crisis and cuts to public education.

“Education is a right, not a business,” read one placard, with other proclaiming “Don’t touch public universities,” and “Why so afraid of educating the population?”

Handkerchief sellers also made the most of this opportunity, selling green (supporting legal abortion), orange (supporting the separation of church and state) and white and blue pañuelos with “in defense of public education” emblazoned on them.

Other protesters wore white overalls as a symbol of the fight for education, and others marched the streets to resounding drum beats to keep their spirits up as the rain persisted.

As night fell, Perfil reported that thousands of people settled in front of the Cabildo building to listen to the speeches of trade union leaders who criticised the government’s policies.

Alberto Kornblihtt, molecular biologist and a doctor in chemical sciences spoke to Clarin expressing his support for the march.

“This protest is gigantic,” he said. “There are thousands of people as never seen before defending public education, free state universities, science and technology in the face of a government who is attacking and oppressing it.”

The education protests and marches have been going on for nearly three weeks now, days plagued with teacher strikes, student occupations and marches. The demonstrators are demanding a 30% rise in salaries and a higher budget for state education. So far, Clarin reported that the Ministry of Education have offered a 15% rise, with talks managing to raise this to 21% although it would not be reimbursable.

“Today we have broken the outrageous ceiling of 15%,” said Daniel Ricci, the General Secretary for the Federation of University Teachers (FEDUN) to Perfil. “But this can’t be fixed with just a little bit more than 15%. We are going to carry on the fight to defend the purchasing power of our teacher and non-teacher companions. We are going to carry on fighting for the budget, so that the country’s 57 universities stay open.”

However, these marches come as Argentina slips even further into its economic crisis, with the peso depreciating rapidly to 41 to the US dollar and interest rates hiked to 60%. On Thursday, Head of Cabinet Chiefs Marcos Peña stated that due to the current situation, “it is impossible…to give out money,” and highlighted the importance of further cuts to get rid of the country’s fiscal deficit.

Talks between the Ministry of Education and trade union leaders restarted on Friday, but it remains to be seen whether the two parties will be able to reach a satisfactory conclusion.