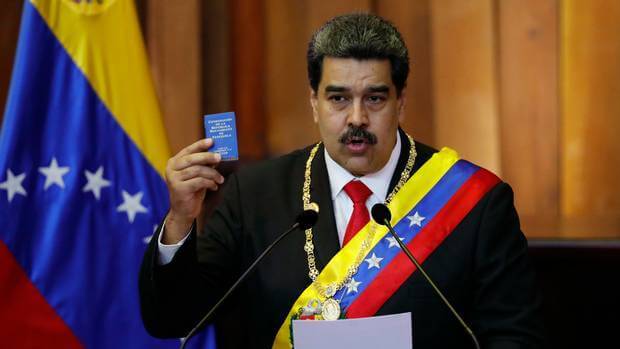 On January 10, the same day that Nicolas Maduro began his second mandate as President of Venezuela after an election widely declared as illegitimate, the Argentine government released an official statement explaining the steps they would be taking to express their rejection of Maduro’s regime. President Mauricio Macri, along with thousands of others, expressed their anti-Maduro sentiments via Twitter, where the handle #NoTeReconocemos (We don’t recognise you) started trending.

THE AGGRESSOR WHO MAKES HIMSELF A VICTIM. Today, Nicolas Maduro is trying to make fun of Democracy. Venezuelans know it, the world knows it. Venezuela lives under a dictatorship.

On the situation in Venezuela: January 10 / Communique from the Argentine government.

At the time of condemning the rupture between constitutional order and the state of law in Venezuela, the Argentine Republic confirmed its full recognition of the National Assembly as the only democratically elected group in the country.

On this day, the Argentine government communicates to the government of Venezuela the cancellation of the Visa Extension Agreement for Diplomatic and Official Passports with the country, prohibiting the entry of high-level members of the Venezuelan regime into Argentine territory.

The Financial Intelligence Unit (UIF) will issue an alert to the finance and banking sector about the risks of carrying out operations with Venezuelan public companies or those controlled by the Venezuelan state.

The Argentine Republic will continue reporting the violation of human rights and condemning the lack of democratic order in Venezuela just as it has been doing since Mauricio Macri assumed presidency.

In accordance with this position, the Argentine Government asked the Prosecutor’s office of the International Criminal Court, along with other countries, to begin an investigation on the presumed perpetration of crimes against humanity in this country, as well as encouraging the suspension of Venezuela’s membership in MERCOSUR as defined in the Ushaia Protocol of Democratic Obligation.

Within the scope of the Organisation of American States, Argentina supports the need to apply the Inter-American Democratic Charter to Venezuela.

On a bilateral level, since October 2015 representatives of the Argentine Republic in Caracas have upheld the Chargé d’Affaires, which has suspended commercial negotiations and political dialogue.

The Argentine Embassy in Venezuela will continue working to provide assistance to dual nationality residents in Venezuela , defending the interests of Argentine companies, and maintaining contact with democratic organisations and movements that consult our country.

Uniquely important is the welcome that Argentina has provided to more than 130,000 migrants and Venezuelan refugees who are escaping the political, economic and humanitarian crisis that their country is experiencing, remunerating the support the Venezuela gave Argentine exiles during the last military dictatorship.

The Inauguration of Nicolas Maduro according to Twitter https://t.co/lpPO5EDv9u pic.twitter.com/9QLLHqXbCY

Many of the steps that Argentina have taken were discussed in a meeting of Lima Group  members earlier in January, but this is the first time they have been confirmed and details have been given regarding the individual measures. The Lima Group has rejected any form of military intervention and instead are looking to evaluate diplomatic and commercial relations with the Caribbean country in order to show solidarity with the Venezuelan people and encourage a return to democracy.