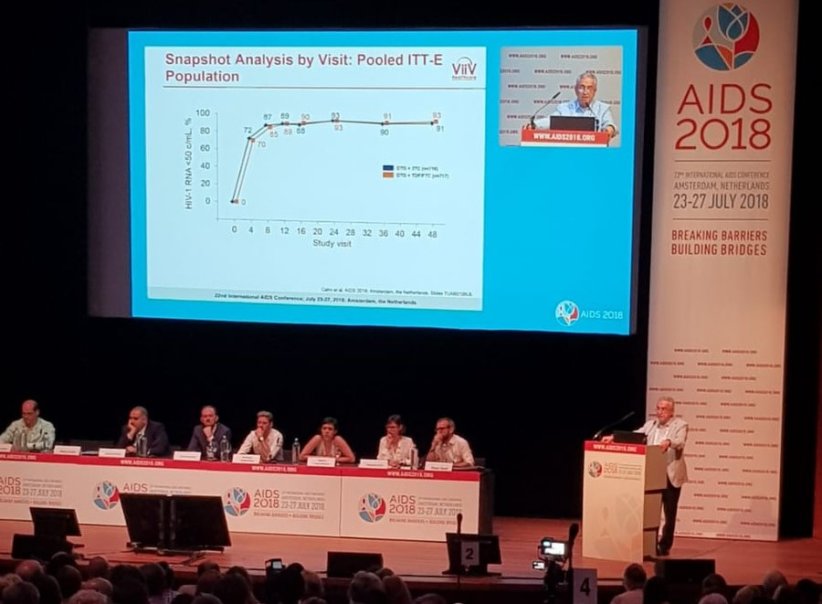 Fundación Huésped then created a study called PADDLE to test the results, and the positive results of this small-scale study aroused the interest of AIDS specialist ViiV laboratories, owned by drugs giant GlaxoSmithKline (GSK). In order to investigate this on a larger scale, they created the GEMINI study, which tested the two-drug treatment against the current three-drug treatment over 48 weeks using 1,400 patients who had not previously received HIV treatment from Asia, Europe, Africa and the Americas.

Reuters reported that the results showed 91% of those taking DTG/3TC had high levels of viral control, in comparison to 93% of those taking the triple-drug DTG + TDF/FTC regime. However, these results are so close that the difference is not significant and the two treatments are seen as being equally effective.

The inability to control viral function was recorded at less than 1% for both study groups, and no cases reported any resistance to the drugs. Both groups had 2% who dropped out due to negative side effects, which were reported as headaches, diarrhoea and nasopharyngitis, however Business Wire reported that these adverse effects were less frequent in the DTG/3TC combo.

“This is a new option for treatment,” Cahn told Reuters. “The main reason for doing this is to reduce the amount of drug burden when patients are on life-long treatment.”

Having a treatment with two drugs rather than three is expected to boost sales as there are likely to be fewer side effects and could potentially be a cheaper option in what is a $26 billion-a-year HIV market. Nearly half of the HIV patients in North America and Europe are over 50, making them more vulnerable to the potentially toxic adverse effects from the drugs, which must be taken continually.

“For the last 15-20 years, the standard of care for HIV has revolved around three-drug regimens,” outlined Cahn, speaking to Business Wire. “Now that we have more potent drugs, the focus is shifting to tolerability and convenience. The GEMINI studies show that we can get the efficacy of three drugs in a two-drug regimen with the tolerability and drug interaction profile of DTG and 3TC. These are important findings for people living with HIV who will spend their lifetime taking drugs to suppress their virus. The studies have the potential to expand the treatment paradigm for first-line therapy of people living with HIV.”

However, the long-term effects of the drug combo are still unknown and it is likely that two or three-year studies will need to be carried out before patients trust it. The possibility of reduced efficacy over time remains and there is also the worry that patients might develop drug resistance over a longer time-period. This is particularly important for HIV patients as drugs need to be taken over a lifetime.

ViiV laboratories will be seeking approval of the drug this year and it has not yet been approved by the US Food and Drug Administration, which will be a key factor in making it available to a wide audience.

According to HIV.gov 36.7 million people in the world were living with HIV or AIDS at the end of 2016, with around 20 million receiving treatment for the syndrome. The creation of an effective treatment using fewer drugs has the potential to make HIV/AIDS easier to control and live with across the globe.

Free festival on Saturday in support of fired Telam workers