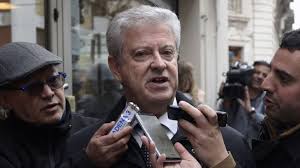 Cristina Kirchner has had a long weekend as police have been carrying out raids on her three apartments since Thursday and has had various items confiscated. This forms part of the ongoing notebooks of corruption case that implicates the ex-president who allegedly lead a group that exchanged US$200 million in bribes over a decade. However, on Monday morning her lawyer Carlos Beraldi released a communique denouncing the illegality of the search.

The search of her house in El Calafate started on Friday morning and didn’t end until Sunday evening, reported La Nacion, as a vault was discovered in the house which appeared to have been constructed during renovations. Judicial sources told La Nacion that the vault contained “many” folders with information about Kirchner’s political adversaries.

Also confiscated from the building were more documents, USB sticks, valuable objects and a van that had an order for possession by the court.

An ambulance came to the residence after midday as housekeeper Maria Saso collapsed and had to be taken to hospital for medical care. However, she returned a few hours later to keep an eye on the search.

Kirchner’s other residences in Recoletas and Rio Gallego were also searched on Thursday.

Beraldi’s communique this morning expressed in eight points the ways in which he believed the searches had been carried out badly, with the view to humiliate and politically persecute Kircher.

“The search of the property at El Calafate was extended in a deliberate and illegal manner with the obvious aim to carry on making a fuss and creating material for the front pages of the weekend newspapers,” the communique read.

“As is customary, they filtered completely false information to the press; none of the houses had a vault, nor documents or objects that could come from an illicit source,” Beraldi added. He also criticised the fact that there was no constant surveillance over the house.

“Throughout the entire night we don’t know who went in or came out of the house, and even less if there was any kind of false evidence planted there.”

Another unexpected result of the searches is that Kirchner has stated she cannot return to her house on Calle Uruguay due to toxic contamination. Beraldi’s communique detailed how cleaners entered the house on Saturday in order to clean the residence, but felt ill upon cleaning the dressing room.

“They felt dizzy, strong stinging of the throat and eyes and had difficulty breathing,” Beraldi explained. The symptoms didn’t wear off for the rest of the day, and he wrote that the cleaners had to go to hospital the following day, where doctors said they had been exposed to a toxic substance.

The head of federal police, Néstor Roncaglia, rejected this accusation out of hand. “No type of chemical was used [during the raid]. We left no toxins.”

Beraldi ended his communique highlighting the “harassment and persecution” that Kirchner was experiencing from Judge Claudio Bonadio, adding that the judge “anticipated the decision that he would make in respect to my defendant, prejudging her on her supposed character as the head of an illicit association.”

Kirchner has maintained her innocence throughout the scandal that broke a month ago, despite dozens more being implicated and many admitting their guilt and confessing to plea bargains to reduce their sentence.

In order to authorise the search of her properties, Bonadio had to request a green light from the Senate due to the immunity Kirchner has in her role as Senator. After various failed attempts, the Senate agreed unanimously to allow the searches on Wednesday, with the raids starting the following day.