Chocobar Doctrine authorised, police can shoot civilians in the back without previous warning 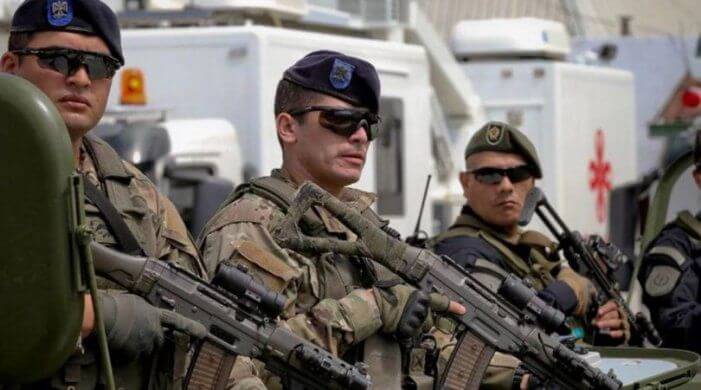 The Official Bulletin was released today, Monday December 3, which explained a new law that allows police officers to fire weapons on criminals who are escaping and “pose an imminent danger.” The law was signed by Minister of Security Patricia Bullrich on November 27, but wasn’t released to the public until Monday December 3.

The new decree has been called the Doctrina de Chocobar (Chocobar Doctrine) in relation to the case of police officer Luis Oscar Chocobar, who is on trial for lethally shooting a thief who had mugged and stabbed an American tourist.

Clarin reported that the American tourist, Joe Woldek, was walking in the La Boca region of Buenos Aires when two men approached him, stole his camera and stabbed him at least 10 times, leaving him gravely injured. The two criminals ran away, one escaped, but Chocobar came onto the scene. He declared himself a police officer and then shot the remaining robber, 18-year-old Juan Pablo Kukoc, in the back as he escaped, thinking that he was about to pull out a weapon.

The events occured on December 8, 2017, and Chocobar is currently on trial for “aggravated homicide in excessive fulfilment of duty.”

In the Official bulletin the Chocobar Doctrine has been authorised. Patricia Bullrich encourages shooting, plain and simple, just as the prefecture did with Rafael Nahuel when they killed him when he had his back turned. Nicolas del Cano, MP for the Argentine Socialist Workers’ Party.

The new regulation 956/2018 for firearms states that “firearms will be used when other non-violent methods become ineffective, and in the following cases:”

Article five elaborates on the definition of “imminent danger.”

Before employing the use of firearms, however, article three specifies that the police officer must declare themselves as such out loud, as well as calling for the criminal to cease the illicit activity. However, it goes on to explain that this may not always be obligatory.

“This requirement is not necessary in situations where such activity could cause the risk of death or serious injury to others, when it would put their own lives at unnecessary risk, or when it is evidently inappropriate or useless, given the circumstances of the case.”

This means that police officers are able to legally fire their weapons without giving previous  clear warning or during circumstances under which the suspect has not yet carried out any illegal behaviour. The decree affects the Argentine Federal Police, the National Gendarmerie, the Argentine Navy Prefecture and the Airport and Port Security Police, who are all under the jurisdiction of the Ministry of Security.

Minister of Security Bullrich defended the new resolution in conversation with Radio Mitre, where she stated that currently police officers “cannot use their weapons to defend themselves or to defend citizens.”

READ MORE: Police officer who killed a man stealing from a supermarket is absolved

“The forces of security are always left in an inferior situation,” she added. “It’s as if they can only repel hostilities. They have to wait until they are fired at, and even then they have to [fire their weapons] in a disuasive manner.”

“This is why we have created this new ruling which will allow security forces to protect people and not be thinking that if they take the necessary decision the opportune moment they will end up on trial or in prison.”

Debates over the safety of police officers have been sparked in recent months as members of the Buenos Aires police force have tragically lost their lives in their line of work. This may be Bullrich’s attempt to give police officers more power to defend themselves and those around them. However, critics state that the new legislation may tempt police officers to overuse their firearms under the assumption that they will not face legal repercussions.