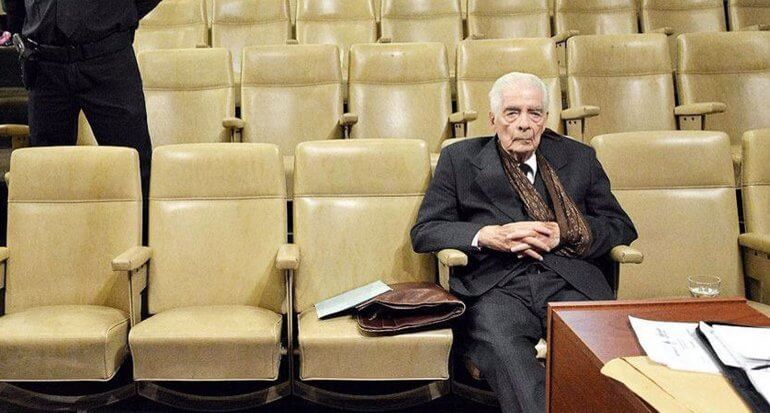 Between the years of 1975 and 1983 whilst Argentina was embroiled in a period of state terrorism under a dictatorship headed by General Jorge Rafael Videla, Menédez is believed to have ordered and overseen 3,000 tortures and murders, according to Spanish journal El Pais.

During Argentina’s dictatorship, more than 30,000 citizens suspected of being left-wing sympathisers consisting mainly of students, artists and journalists disappeared under the brutal regime. These citizens were often never heard from again yet eye-witness stories recount the horrors of torture centres (such as the ESMA centre within Buenos Aires) and of military death squads that threw prisoners from airplanes out at sea.

During this time whilst Menédez was head of the Third Army Corps, the disgraced general designed 238 detention centres across the country where communist prisoners were sexually abused and tortured. Based on reports by the BBC he also oversaw the removal of the children of left-wing activists who were later adopted by other military families or ‘disappeared’ themselves.

By the fall of the regime, Menédez had further expanded his power to also focussing on conventional warfare with Chile and, by 1984, he was initially convicted. Following a pardon and other political setbacks, Menédez was finally charged in 2005 for his actions pertaining specifically to the genocide. His 13 life sentences amounted to the highest charge any of the war criminals faced in this period. Since then, he has spent his sentence under house arrest within Cordoba.

Since the end of ‘The Dirty War’ in 1983, citizens have tirelessly campaigned in order to ensure this part of the county’s history and the memory of the victims is not forgotten. Alongside efforts from Argentina’s most prominent activist group, Asociación Madres de Plaza de Mayo and following a number of high profile marches, a number of children have since been reunited with families from before the dictatorship.

In the quest for truth and the preservation memory, Argentina has now also transformed the ESMA building into a museum of history and memory for the victims. The mothers continue to act as a voice for the activists that were silenced throughout this period political oppression.