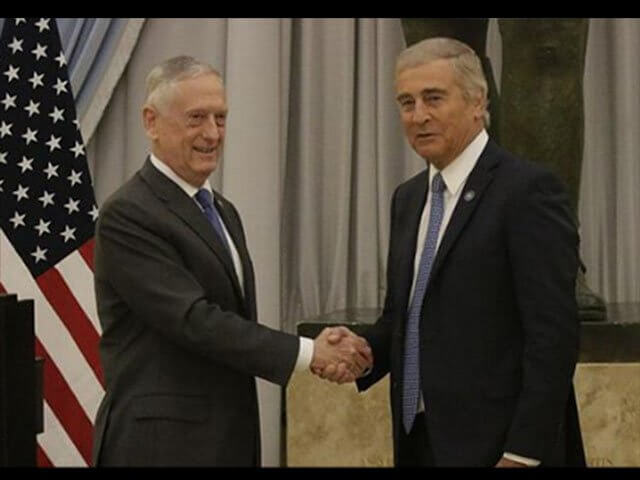 Argentina has agreed to develop closer military ties with the US after a meeting between Ministry of Defence Oscar Agaud and US Defence Secretary James Mattis.

The two officials met on Wednesday, which marks the first time a US defence secretary has visited the country since 2005 due to a fraught relationship during the Kirchner presidencies. Mattis has since welcomed the opportunity to develop the relationship between the two countries and enhance agreements.

“We have come back to the road we should never have left,” Mattis said, reported in the Military Times.

According to Clarin, the two signed agreements on education, information exchange and identifying requirements, as well as affirmed that the technical teams will continue advancing to fix this process.

Mattis also stated that the US would not help Argentina directly in their fight against drug trafficking and terrorism. However, he said the US military would support and contribute the country’s military training, something that was common practice before the Kirchner’s broke ties with the US military.

“We will go back to the same kind of training that we always did,” explained Mattis. “We’re on the way, we’re going in the right direction. There is an economic reality that has to be addressed, but we are in good form.”

Argentina’s “economic reality” was a topic within the discussions, as Argentina’s incredibly high inflation and currency crisis leaves little money for military exchange. Mattis also mentioned both party’s desire for transparency after some of Argentina’s secretive actions in the past.

“We focused on what we can do working together as they go through very difficult economic times,” Mattis told reporters as he left Buenos Aires for a flight to Santiago, Chile. “Both sides are very open to a stronger military-to-military relationship in complete transparency, so there cannot be any doubt about what’s going on.”

Mattis is travelling to various countries in South America in an attempt to strengthen ties in order to counteract China’s increasing hold on the continent. When asked about China’s space base in Neuquen, Patagonia, Mattis wasn’t forthcoming on the subject.

“Yes, it came up,” he told reporters.

The US are launching their own space force, but are worried that China’s new base in Neuquen could be used for military purposes, despite their promise that it will be for peaceful use only.

From Argentina, Mattis travelled to Chile and will then travel to Bogota, Colombia, as the last stop of the defence secretary’s tour of the continent, which also included Brazil.