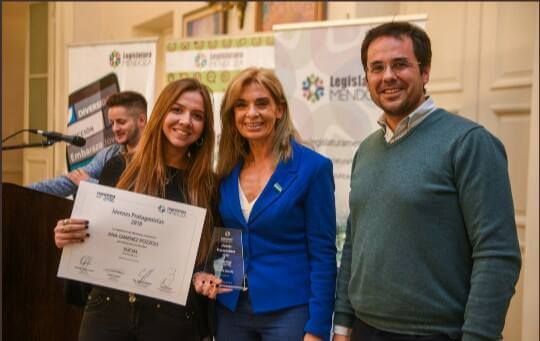 As the winter sets in across Argentina, hot showers might seem more of a basic right than a luxury, but in many areas of Mendoza people do not have access to hot running water.

This is why Ana Giménez, a 22-year-old law student, has taken time out of her busy schedule to create a solar-powered water heater that can provide hot showers for free.

“It’s really crazy, as a hot shower and feeling clean can be really important for a person’s dignity, and to help them move forward,” Giménez told El Federal.

Originally her father’s idea from July 2017, Giménez worked on the prototype and managed to create the first version using mainly recycled ingredients. She told Uno San Rafael that had she bought all the components new it would have cost 700 pesos (around $25), but with the second-hand materials the price was reduced to 300 pesos (around $10).

Having worked in volunteering for the past seven years, Giménez understands the importance of teamwork, and she managed to get local groups to provide materials to help her. The paint used comes from the Godoy Cruz city council, and the plastic bottles are donated by Talca water, who are happy to give her the bottles that they can’t use due to minor faults.

The Ducha de Sol (sun shower) heaters can keep water at 45-55°C during the summer, saving 100% of energy costs, and around 30-35°C in the winter, saving on average 50% of costs. The group, consisting of Giménez, her father and around 15 volunteers have already installed around seven showers in the Piedra Blanca barrio of Godoy Cruz.

“The families welcomed us and told us that we are the only form of help that they get, because people don’t listen to them, but us as young people do,” Giménez told Uno San Rafael.

Despite only being active for a year, Duchas de sol have received various forms of recognition. In December 2017 the group won the ‘Mentes Transformadores’ (Minds that Transform) award, along with the 400,000 peso (around $14,000) prize money.

More recently the young lawyer-to-be was recognised as a ‘Joven Protagonista’ (young leader) by the Legislative body of Mendoza in the ‘Social Work’ category at the end of June this year.

Although based in Mendoza where an INDEC survey placed poverty levels as 33.5%, Giménez hopes to find the support she needs to bring her project across the country.

“The idea is to go to more areas in the province, and in the future to more provinces,” she told Uno San Rafael. “But we need more support, logistical and economic and so on. We can provide a workforce and the prototype.”

Renewable energies are becoming more of a viable resource as mass production makes them cheaper to acquire. This also provides a cheaper alternative energy source, a blessing in a country where utility bills are creeping up due to the economic crisis the country is facing.