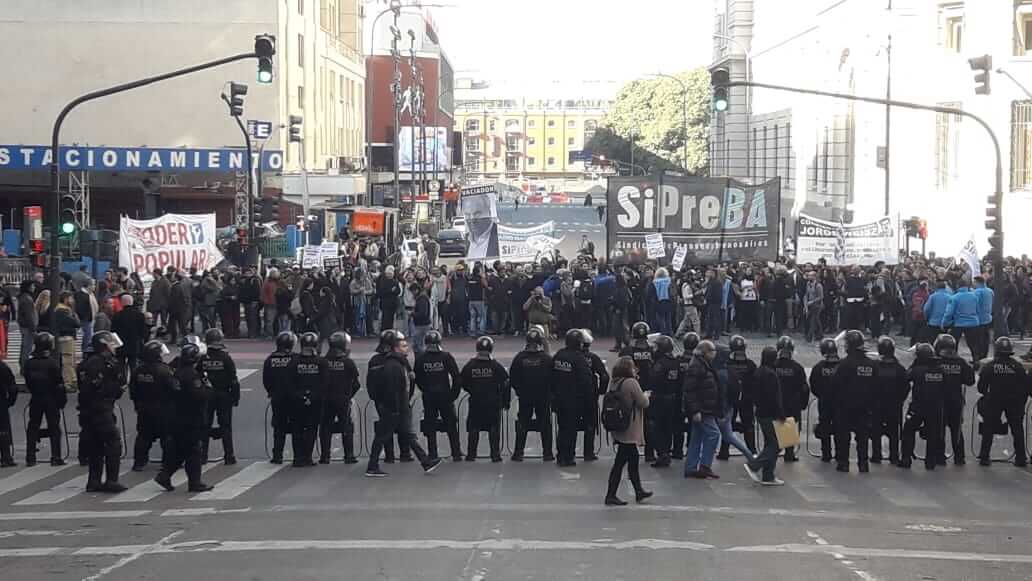 State news agency Telam is firing 354 workers in a bid to cleanse the company of its “Kirchnerist legacy,” sparking widespread controversy amongst Telam employees.

Telam released a communication on Wednesday morning explaining the reasoning behind this mass lay-off entitled ‘The Telam agency has a future,’ in which the company blamed the previous Kirchner government (2003-2015) for the current issues faced by the group.

The communication explained that in 2003 the company consisted of 479 employees and then experienced a huge drive to hire more workers, raising the number of employees to 926 in 2015 before Mauricio Macri came into office. Six out of 10 were hired to fill journalistic roles, despite the majority of them having no experience in the field.

“They confused journalism with pro-government propaganda,” the communication read.

The news agency received new leadership in January of 2016, where they attempted to eliminate this worrying tendency, but they were not successful.

“Two and a half years of effort to professionalise the company kept coming up against a group who confused privileges with rights,” explained Telam’s article.

The previous Kirchner government, which held office for 12 years between husband and wife Néstor and Cristina, has been accused of various counts of corruption as the couple’s wealth sky-rocketed from $7 million at the time of their election to $82 million a decade later.

The Kirchners’ also had various spats with media groups including Argentina’s largest, Clarin,  as well as La Nacion and El Perfil, as they published articles that clashed with the government’s ideologies at the time.

This resulted in the media groups missing out financially, as a General Audit showed that in 2009 official advertising was spread unevenly across the different media groups, without applying “objective criteria” to explain their choice.

La Nacion published the audit information, showing that media sources that supported the government received larger portions of the state advertising (which brings in significant revenue), such as Pagina 12 (17.9%) and Tercero (13%). However, despite their much larger circulation, Clarin, La Nacion and La Razon received 15%, 8% and 4.7% respectively.

Despite Macri’s claims to clean up Argentina’s legacy of corruption, the Pope himself has recently drawn attention to the importance of the media’s role in a society, and the dangers of “the destructive capacity of evil communication,” with many seeing his comments as a direct criticism of Argentine media.

“Even now, in many countries, this method is used: destroy free communication,” the Pope said, reported in Clarin. “[…] Dictatorships, all of them, have started in this way; with tampering with the media, putting the media in the hands of someone without scruples, a government without scruples.”

Telam’s controversial decision to get rid of such a large amount of staff is being explained as attempt to rid the company of the last remnants of this unhealthy attitude towards media as an extension of the governments ideals.

However, as this comes just a day after the national strike on Monday that protested against a lack of work security among other issues, many of those fired are not taking the blow sitting down.

MinutoUno reported that the Buenos Aires Trade Union (Sipreba) and the Press Workers Trade union (Sitrapren) incited the Telam staff to stage a take-over of the two news agency’s offices on Calle Bolivar and Avenida Belgrano.

“We are having a total strike from all activities along with the occupation and peaceful take-over of the two Buenos Aires offices,” the trade unions explained in a communication. “What we have is a break-down; a project to dismantle the media under state management and hand it over to a media system in favour of financial resources concentrated within industry.”

The recent economic and financial crisis means that confidence in Macri’s government is at a severe low point, and the agreement with the IMF has sparked various marches and protests and was a catalysing factor in Monday’s general strike.

The Telam communication published on Wednesday explained that the agency “was a victim of the irresponsibility and bad management of the previous government,” and that the measures taken were a positive move to improve the company as a whole and divest itself of the negativity surrounding much of the media.

“The new Telam will be a modern agency, trustworthy and multi-platform,” the communication ended. “A leader in the national and regional information market, with an international impact, recovering the pride to be a Argentine state-owned company, and recognised all over the world for it’s reliability.”