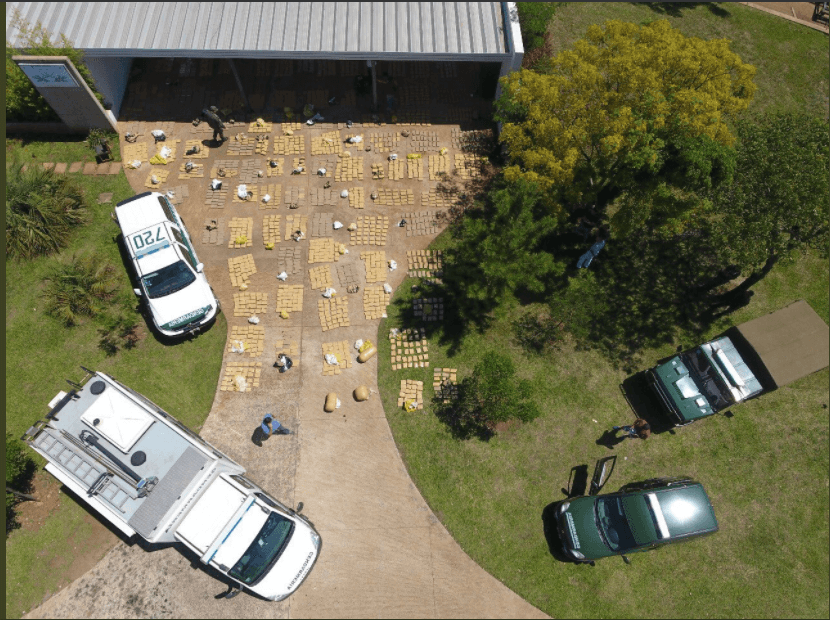 Argentine authorities seized over seven tons of marijuana this past weekend in the northern provinces of Corrientes, Formosa and Misiones following several operations by the Navy and the National Armed Forces (GNA), according to a statement from Argentina’s Security MinisterPatricia Bullrich.

One of the first of this weekend’s operations was orchestrated overnight by the GNA, which, headed by Gerardo Otero reportedly scoured Yacyretá Lake in Misiones following a tip. Amongst the dense vegetation within the area the authorities were able to locate and seize two tons of marijuana that Bullrich noted was ‘cooling down’ before onward transportation and distribution within the country.

In a further series of operations that began earlier this week throughout Itati (located in the nearby province of Corrientes) authorities successfully tracked and seized a total of 4,200 kilograms of packaged marijuana concealed on the bank of the Paraná River, as well as further locations within the neighbourhood. The series of local operations here used a team of over 70 officers that were able to complete the raids within such a small window of time due to a variety of techniques such as surveillance and patrols.

Altogether within the area this figure constitutes a new record of drugs seizures, according to Argentina’s El Comercial news web site.

Following a local complaint of suspicious activity in a vacant area of Riacho Negro, Formosa, it was also the Navy that successfully seized a further ton of the drug which was being concealed by traffickers waiting to safely extract the product.

The successful raids over the weekend are also a result of a framework known as the Shared Open Border Operative (OCAF) which, co-ordinated by Border Secretary Luis Green encourages information sharing and joint co-operation between authorities in both provinces.

Following last week’s events that saw Argentina seize 400 kilograms of cocaine at the Russian embassy leading to several arrests both in countries, the recent marijuana operations demonstrate increasing efforts to clean up Argentina’s narcotics trade. It is unclear however whether any arrests have been made so far in relation to the increasing clamp down this weekend on drug trafficking within the country.

The minister has been hailed for her efforts as this month will also mark the highest seized amount of marijuana in the country since January of 2014.