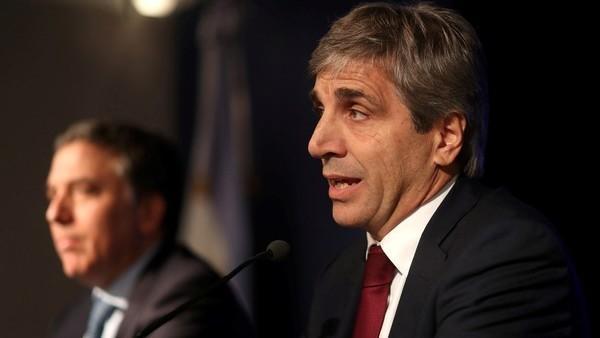 Luis Caputo took the reins of the Central Bank last Friday, and he has put in place a plan that will make significant changes in a bid to balance the economy and put the brakes on the rise of the peso.

Caputo, who replaced Federico Sturzenegger as president of the Central Bank, has vice-president Gustavo Cañonero at his side to help him set up measures that hope to bring back support and trust to the Argentine economy. This will be a difficult task, as the dollar reached its highest levels since President Mauricio Macri’s office began.

One of the first measures put in place, which will start on Monday, is the daily auctioning of the dollars from the International Monetary Fund (IMF). Taking place daily from 3.00 to 3.15 p.m. p.m, the government hopes that this will balance the exchange market, at least in the short term.

The second measure is to offer more financial options so that investors don’t choose the dollar, and to replace the lost Lebacs stock. La Nacion reported that the Treasury had put in place two bonds, one for a year and another for two years, with a total sum of $4 billion. This is an attempt to persuade those who do not want to renew their Lebac this week, but are prepared to buy other assets if they are more attractive than dollars.

Caputo is also willing to rise interest rates to restore balance to the market. On Friday he decided not to put a ceiling on the Lebac bonds and allowed the rate for the expiring in July to reach 60%. Infobae explained that this is due to the importance of ending the rise of the dollar, and once this has been achieved, then the interest rates can then be lowered.

Caputo also turned his eyes to the countryside, where cereal producers are delaying the sale of their foreign currency in the hope that the dollar will rise even more. However, if they can be convinced that the future will not see any increases, they could speed up liquidation in the upcoming days.

El Canciller also reported that Caputo had come to a new liquidation agreement with the agriculture exports sector of about $4 billion for June and July.

On Thursday, Argentina will receive the first $15 billion payment from the IMF, and on Wednesday the MSCI will make a decision whether Argentina’s economy can be bumped up from a frontier economy to an emerging economy. Argentina is currently the last country in the America’s to remain as a frontier economy, meaning is seen as less developed and much riskier in terms of investment.