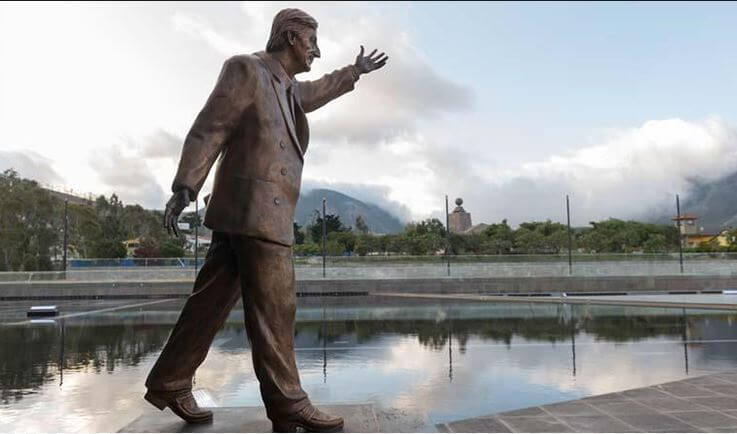 Ecuador’s National Assembly has voted for the immediate removal of a statue of Néstor Kirchner that is placed in front of the Union of South American Nations (UNASUR) headquarters near Quito, reports Clarin.

The vote took place on Tuesday Aug. 7 and was proposed by Byron Suquilanda, a member of liberal party CREO, who labelled the statue a “symbol of corruption.” Suquilanda tweeted his speech in front of the National Assembly, saying that Ecuadorians should be proud of their heritage, which is not represented by a statue paying homage to “questionable politicians” like Kirchner.

“It is not a good example for Ecuadorians, it is not a representation of the Latin American integrity, which is integral to UNASUR,” he said. “I want to appeal all of your patriotic sentiment, for the dignity of Ecuadorian people and to set an example for our youth, to encourage that this monument be removed, as it has nothing to do with the Ecuadorian cultural identity and it is nothing else but a justification of crime and the rampant corruption in the Argentine government over the last few years.”

The petition for the removal of the statue received 72 votes in favour, 30 against and there were 9 abstentions.

The statue itself is made of bronze and measures almost 2.3 metres high. Weighing in at around 600 kilos, the sculpture shows Kirchner with his jacket open and an arm raised to the sky.

In the next few days, Ecuadorian President Lenín Morena will have to decide on the date of the statue’s removal and what the future holds for the controversial effigy.

This news comes as Argentina is embroiled in numerous corruption charges against both current and previous governments, with the Notebooks of Corruptions case elbowing its way into headlines across the country. Cristina Kirchner, like her late husband Néstor, is also implicated in these events and will be questioned by Judge Claudio Bonadio on Aug. 13.