Internet access for the blind: Argentina’s Linguoo on making the internet a more inclusive space 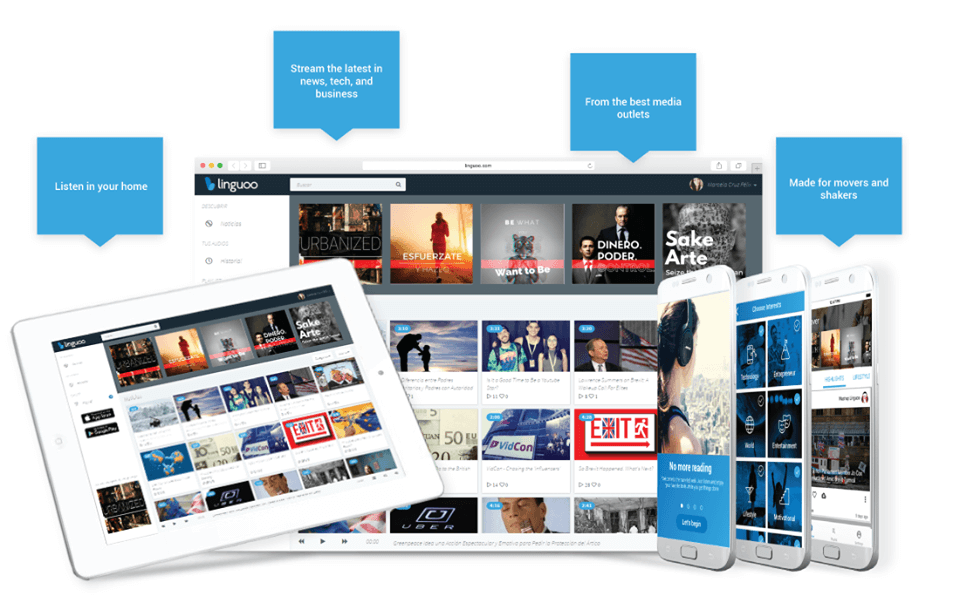 Having existed for almost 30 years, the internet has become a tool that most users tend to take for granted. However, what would happen if, for example, a disability were to inhibit our ability to navigate the web?

Linguoo CEO and co-founder Emanuel Ferrero believes this to be one of the biggest faults of humanity’s largest database. “The web was created as a space for the distribution of knowledge, but without taking into account accessibility and inclusion,” he said in an interview with our sister publication Latam.tech.

Two years ago, as his mother began to lose her eyesight, Ferrero decided to research platforms that would allow him to convert written text on the web into audio, so that his mother could continue to access the internet despite her disability.

However, he found himself frustrated by the lack of platforms that spoke in a human voice, with most of the options available only offering automated or robotic-voiced content, which Ferrero describes as an “emotionless and cold experience.” This inspired him to create Linguoo, his own solution to the problem.

Linguoo is an “inclusive platform” that allows users to listen to articles and short audio books recorded by real people, without robotic voices. Available on both Android and iOS, the app works just like Spotify or any podcast platform, whereby users pay a subscription to join the “community of storytellers.” As well as accessing the library of material available, they are also able to contribute content themselves, explained Ferrero.

As long as audio quality is taken into account, recordings can be done by any member of the Linguoo community, from any device, and then submitted to the Linguoo team to be uploaded onto the platform. “People can record articles and short audiobooks from anywhere in the world… in this sense we are like Wikipedia, a decentralised content production platform that works via user contribution,” Ferrero said.

Given Linguoo’s base in Córdoba, Argentina, content may also be uploaded in Spanish. The audio recordingsnow reach over 12 different Latin American countries, with around 100,000 users in total across the world.

Not only does the app provide access to a service which would otherwise be extremely difficult to access for people with certain disabilities, it is also convenient and practical, explained Ferrero. “Lots of people use the app because it allow them to listen to interesting content whilst doing other activities,” he said.

Reactions to the app amongst its users have been very positive, explained Ferrero. Thanks to Linguoo’s partnerships with 12 NGOs linked to visual disability and dyslexia, to which they donate content each month, the team receive many specific book requests. As a result, subscriptions keep coming, as well as partnerships with telecommunications companies looking for audiobook platforms, which increases the size of the community.

The Linguoo team have also received international recognition for their achievements, collecting a prize from the Massachusetts Institute of Technology in 2015 and further awards in 2016 from both UNESCO and Google.

Describing what differentiates Linguoo from other podcast or audiobook platforms, Ferrero pointed out the sense of community that characterises Linguoo, explaining that it works towards a “sense of reward for humanity.” “We are not a company, but a community, and we think of everything from this perspective,” he added.

“I think all startups should think about ways they can help each other and from this, try and rise up to the source of global problems that beset humanity,” said Ferrero. “Then, the money comes on its own, but if – on the way – you can improve the life of those who suffer the most, it is worth double.”

In the meantime, the Linguoo team intend to continue expanding their community and working on a series of tech projects focused on disabilities such as deafness, dyslexia and dyspraxia. “Each project works on a different disability,” explained Ferrero, “but we all have the common goal to provide help for whoever needs it, via collective knowledge, technology and community.”

This article was originally published on Latam.tech.