Judge Bonadio has asked to strip Cristina Kirchner of her immunity 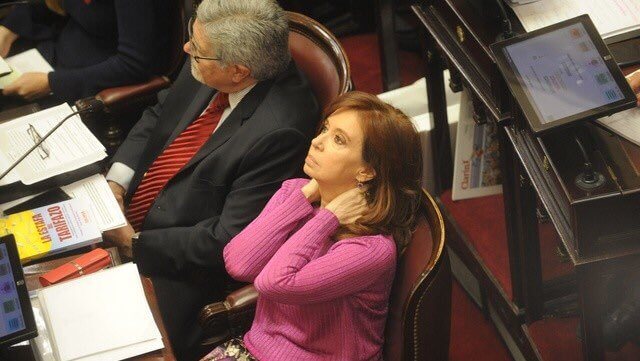 Judge Claudio Bonadio has requested that Argentina’s ex-president Cristina Fernández Kirchner be stripped of her immunity to allow authorities to search her three residences and offices in relation to the notebook corruption scandal that broke on Wednesday.

The scandal, which details the illicit exchanges of US$160 million between 2008 and 2015 has placed both Cristina Fernández and her late husband Néstor in the limelight.

“The association [of money exchanges] was commanded by Cristina and Néstor Kirchner,” Bonadio told the court, reported by Perfil. “[They] unlawfully held office as President of the Nation.”

This isn’t the first time that Bonadio has asked to remove Cristina Fernández’s immunity. Earlier this year he asked the senators to approve the measure during investigations that suggested she had helped to cover up the AMIA terrorist attack in 1994. However, this was an unpopular move within the senate and didn’t get the majority vote Bonadio needed.

According to the Ley de Fueros (Exemption law) 25.320, article one states that a judge cannot search the home or offices of legislators unless this has been authorised by the political house they form part of. Cristina Fernández is a sitting senator for the Unidad Ciudadana party, which places her firmly within this exemption law.

Bonadio has called Cristina Fernández to a meeting on Aug. 13 in order to investigate the case which he believes strongly implicates the ex-president. Her immunity means she is free to skip the meeting as she has done in the past, without fear of being brought in front of the judge by force. La Nacion reports that those close to her assure that she will be present, although she could turn up but refuse to answer any questions, instead presenting a pre-prepared written statement in response to Bonadio’s allegations.

President Senator of the Nation, Gabriela Michetti, has requested that political coalition bloc Cambiemos start the pertinent parliamentary processes to convoke a special session to discuss authorising Bonadio to search Cristina Fernández’s properties. Michetti also asked for the subject to be treated as swiftly as possible seeing as it could have strong institutional implications.

Cristina Fernández has thus far stayed silent on the subject, although she is due to appear as a speaker at a meeting of 400 leaders of the mechanics trade union (Smata) in Buenos Aires today. La Nacion implied that this was her chance to have her say in front of a friendly audience.

The ex-president has often accused the judicial system of being impartial and believes that she is being targeted merely for being in the opposition party. In 2017 she first used the word ‘Lawfare,’ an English word mixing law and warfare which refers to when a justice system repeatedly targets politicians from the opposition party in order to discredit them.

“No country is constructed with judicial destruction of political enemies,” said lawyer Maximiliano Rusconi to Clarin. “Nobody can be against judgement for supposed corruption charges, but nobody can accept that with such easy arguments people are locked up, only for having been qualified as enemies or opposition.”

If the upper house allow the justice system to strip Cristina Fernández of her immunity, it will be possible to carry out searches of her three residencies and her offices, potentially leading to more concrete evidence against her. Perhaps more importantly, it would give Bonadio the authority to place her in pre-trial detention which would halt her current political activities and could destroy her chances of running in the 2019 presidential elections.