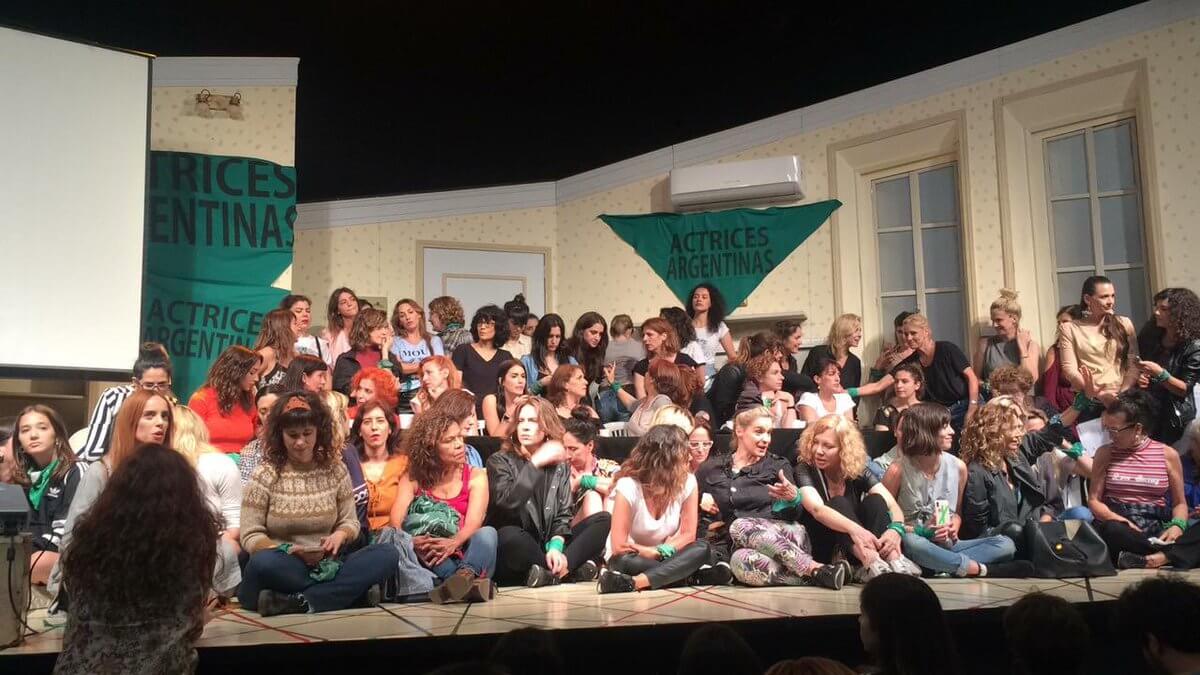 Actress Thelma Fardin has reported fellow actor Juan Darthés for sexually abusing her when she was 17 and he was 45, and as a result has received the support of hundreds of actresses from the Actrices Argentinas activist group.

Fardin recorded a video that was shown at an Actrices Argentinas press conference on Tuesday December 11, reported Todo Noticias, where she emotionally recalled the events that happened nine years ago. Fardin was touring Nicaragua as part of the Patito Feo (Argentine comedy TV series) tour in 2009.

“I was just a girl and the only male actor who was travelling with us was 45 years old,” she said in the video. “He started to kiss my neck even though I said no. He threw me on the bed, moved my shorts aside and practiced oral sex on me, even though I was telling him no.”

“He climbed on top of me and penetrated me,” she continued. “Luckily someone knocked on the door and I could leave.”

in response to a journalist’s question, Fardin explained that she told two other actresses in the Patito Feo tour about what happened, but they were also young girls and didn’t have any way of helping her. Infobae reported that she had said  she “blocked” the idea of reporting him completely until other actresses stepped forward and denounced him for separate cases of sexual misconduct.

In the video, she explained that Darthés grabbed her hand and put it on his erect penis, saying “look what you do to me.” This is the same phrase he used with actress Anita Coacci, who denounced him for sexual abuse that occurred in 1999. Actresses Calu Rivero, Anita Coacci y Natalia Juncos Brenda Asnicar have also reported Darthés for sexual misconduct, but thus far there have been no legal repercussions.

According to BBC Mundo, Darthés has asked that the accusations against him are “not mediatised,” and that he “prefers silence” asking to wait “for justice to take its course.”

Ana Rosenfeld, who had been the lawyer representing Darthés, took to Twitter to announce that she would no longer act as his lawyer after becoming aware of Fardin’s accusations.

Tomorrow I will present to the courts my resignation of legal counsel and representation of Juan Darthés.

After the video was shown, actress Laura Azcurra read a communique from Actrices Argentinas, saying that 66% of actresses had experienced some kind of sexual abuse during their careers.

“Objectification and oppression are common practice in our line of work,” she read. “We are always unprotected by those who contract us. There is no protocol for cases of abuse. We need tools to face these issues.”

As an example, actress Griselda Siciliani supported fellow actress Calu Rivero (both in Patito Feo) when she said that she had felt abused by Darthés. The Patito Feo producer took to social media to insult Siciliani, calling her a “serial liar,” a “bad colleague” and a “whore.”

As a group, Actrices Argentinas came together at the start of the year to demand legal abortion, a proposal which was finally voted down in August. However, they have also fought against issues such as gender violence, femicide and the gender pay gap, as well as defending education, public health and children’s rights. They were present in the women’s strike march for Lucia Perez, a girl who was allegedly raped, drugged and killed, but her aggressors went unpunished for these crimes.

READ MORE: Two men accused of rape and femicide in Lucia Perez case absolved due to lack of evidence

This new high-profile denouncement has been labelled Argentina’s #MeToo movement, which started as actresses denouncing sexual abuse within Hollywood.

Instead of using the #MeToo hashtag, however, after the event other hashtags started trending such as #NoNosCallamosMas (We won’t be silent anymore) and #MiráComoNosPonemos (Look what you do to us), as a direct response to Darthés’ words. Actress Muriel Santa Ana closed the press conference with a small speech.

The press conference ended with an emotional standing ovation.

Judicial sources told Infobae that the next stage in the case is to collect evidence in order to prove Darthés’ misconduct, but that issues may arise when deciding whether the court case should take place in Nicaragua or Argentina.

Fardin has filed a report against Darthés in Nicaragua with the Argentine Consulate and the Permanent Commission of Human Rights (CPDH). What is important in this case is that the events happened 9 years ago, whereas had it happened over 10 years ago, the crime’s validity would have expired and Darthés would not be able to be punished for it.