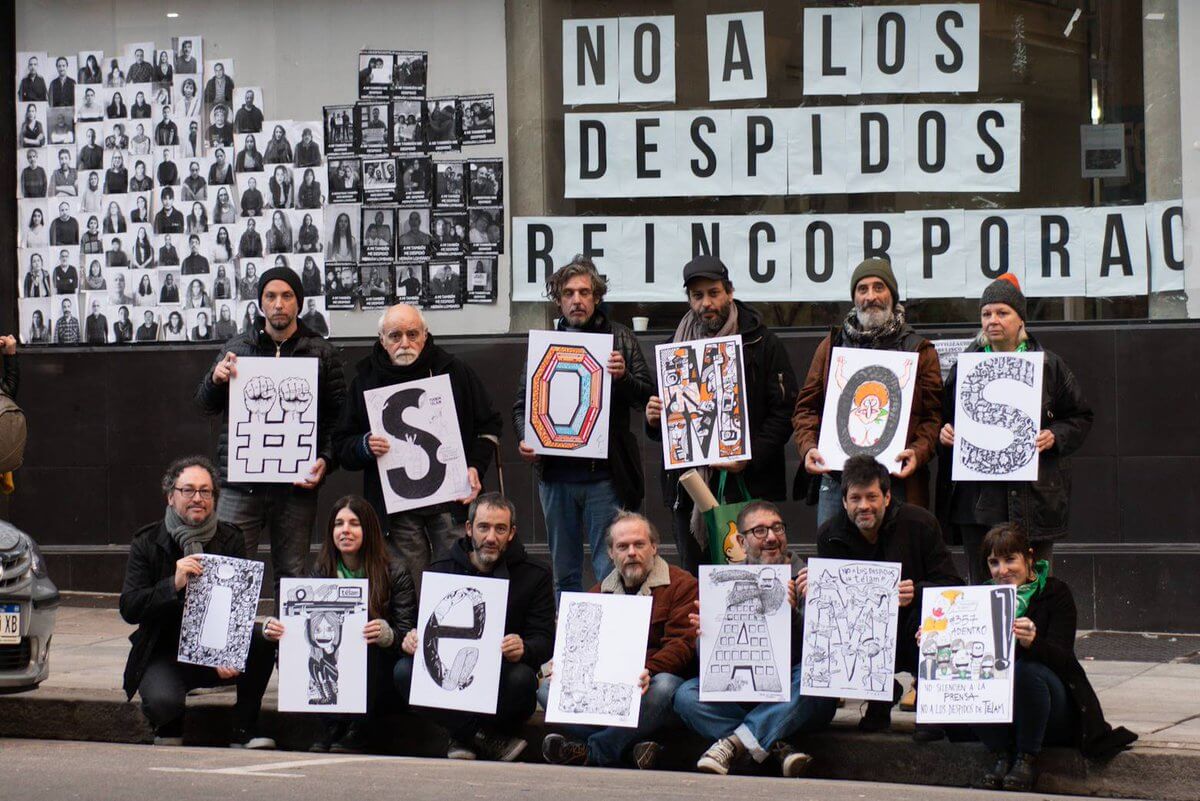 After weeks of peaceful protesting, the 354 people who were fired from state-owned media agency Telam have received some support from the justice system.

TeleSur reported that head lawyer for Social Security Gabriel de Vedia has voted for the reinstatement of those who lost their jobs in response to an argument presented by the National Civil Association for Equality. The organisation argued that the layoffs were carried out “in an arbitrary time frame and in a discriminatory manner.”

On June 26. 40% of Telam workers were given their notice without previous warning. This came alongside a communication on the Telam page explaining that the decision was a result of over-hiring and intimating that the staff had no experience in the sector and “confused journalism with pro-government propaganda.”

The staff have been protesting since that time by taking over the Telam headquarters in Buenos Aires, and upon hearing the news of de Vedia’s support, the workers were seen embracing each other in joy.

De Vedia was reported in Filo that “it is being demonstrated without doubt that the lack of a laboral relationship results in negative effects for the worker and for their families.”

Now the workers have to wait for a judge to give his verdict on their situation.

The Minister of Federal Media, Hernán Lombardi, wrote a long status on Facebook giving his support for Telam’s decision on June 26.

“Today journalism has won, and citizens have won. Citizens [have won] because they will receive objective, true and independent information from the Telam Agency. Journalism [has won] because it will be able to carry out its noble purpose without pressure or blackmail.”

Lombardi was called to the Commission for Work and Freedom of Expression on July 3. to explain why the layoffs had happened, but he did not turn up. On Wednesday 11 he is expected to be present at the Chamber of Deputies to give more answers.

Camilo Straschnoy, a Telam employee, wrote a critical analysis of the situation for TeleSur, staunchly refuting the reasons behind the layoffs given by Telam in their communication. He also criticised the government’s handling of the situation, who are making cuts in order to help realise fiscal deficit in line with IMF demands.

“The cuts are always made to whom they assume are the weakest link: the workers,” he wrote. “While the government continues to favour financial speculators and economic oligopolies, President Mauricio Macri has decided to dismiss scientists, technicians and now also journalists working in different public sector bodies.”

He went on to explain that there had not been an official list circulated of those who had lost their job, meaning that many Telam employees are still unsure whether they are still contracted or not by the media company.

This comes at a time when Argentina is rife with protests and demonstrations against government economic management, the IMF loan and the resulting job precarity and salarial inequality.