Macri takes to Instagram to answer questions about food, politics and what he thinks of being called ‘Macri gato’ 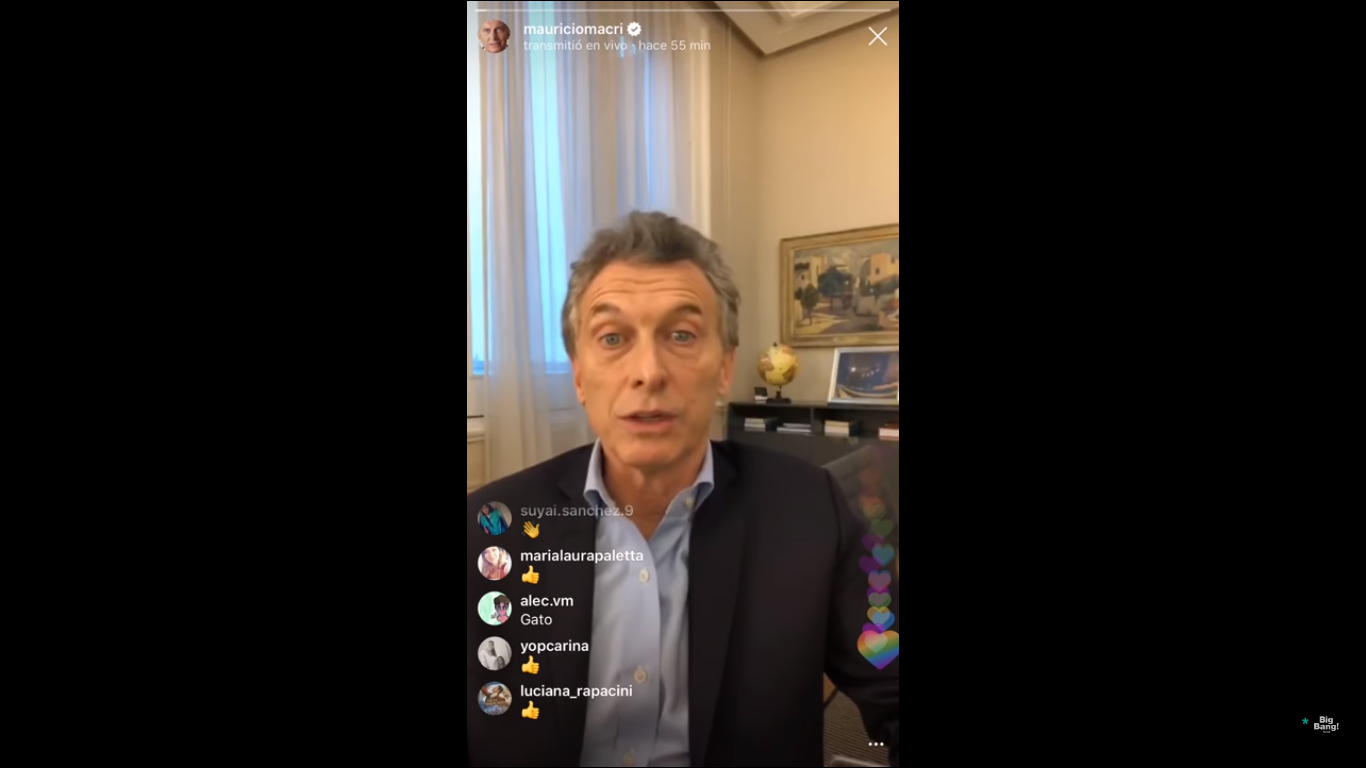 The day after President Mauricio Macri’s press conference, he gave another one. This time, not to journalists, but to his Instagram followers.

The 20 minute ‘conference’ was delivered on Instagram’s live stream, and Macri improvised answers to any and all of the questions asked by some of his 842k followers on the social media platform. The questions varied hugely, with most leaning towards his personal life, but there were also questions about politics littered in among curious inquiries about the President’s favourite series, hobbies and food.

The Argentine President informed follwers that his favourite food was his mother’s homemade pizza, as well as schnitzel “unless it’s moist.” When asked about his free time, he admitted that watching TV played a large part in his down-time.

“I’m a massive fan of Netflix,” he said. “I’ve seen them all. The one I liked most was Peaky Blinders, I recommend it, really spectacular.”

When faced with more uncomfortable questions, the president answered with humour. One follower asked Macri what he thought of his nickname ‘Macri gato’ (Macri cat), and he replied with a smile, “What do I know? It seems funny.”

Showing a very human side, he added that he had been in therapy for many years and that he spent a lot of time reflecting.

Replying to more political and economic-focused  questions, Macri reiterated that the country has a floating exchange rate, and “we have to get used to living with that,” asking the viewers to start thinking in pesos, not in dollars. He was not above criticising himself, admitting that inflation was an issue that had to be resolved.

“I thought it was going to be more simple,” he said. “I underestimated it.”

However, to combat the negative media coverage of the various austerity measures put in place to reduce the country’s fiscal deficit, he didn’t fail to point out the positives, explaining that there were sectors that hadn’t been adversely affected by the economic crisis.

“We are producing more and more gas, petrol, lithium, tourism isn’t stopping and software exports aren’t either,” he said. “Wheat is going to beat production records after this year’s drought, which was also part of this perfect storm.”

Macri was also asked about the crisis in Venezuela, which is causing refugees to arrive in many countries across Latin America looking for work and safety.

“What’s happening pains all of us, this increasing violation of human rights, this violence which has got out of control,” he said. “The minimum we can do is welcome them. They’re coming to work, to bring something. We need people with ideas and with drive.”

After probing Macri’s personal and political life, one follower asked a question many had wanted to ask.

To which Macri evasively replied, “I’ll tell you later.”