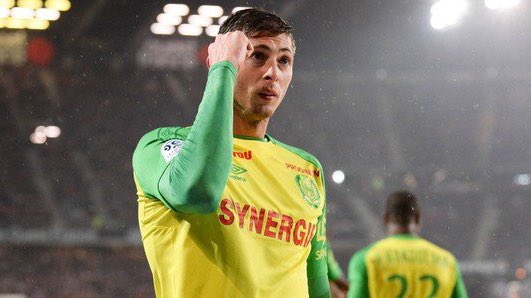 Argentine footballer Emiliano Sala was in a plane that disappeared over the English Channel on Monday night as he was travelling to Cardiff after a club transfer.

At 28 years old, Salas had just become the most expensive sign in Cardiff City’s history, with the forward receiving €17 million to transfer from French club Nantes to Cardiff City.

According to sources close to the case, reported Clarin, there were three people on board the 5-seater Piper PA-46 Malibú plane, two passengers and a pilot. French sources affirmed to BBC Mundo that one of the passengers was Sala, but the identity of the other people on board has not been released.

Travelling from Nantes, France, the plane took off on the evening of Monday, January 21, although there is conflicting information about what actually happened before it disappeared. According to BBC Mundo, the plane was flying at 5,000 feet over the British island of Jersey when it contacted the air control tower asking to descend. Todo Noticias, on the other hand, tweeted that there was no unexpected activity.

“There was no call for help: they simply lost it on radio and communications. It’s possible that the plane had made a detour to somewhere else, but the search continues, in the unfortunate case that it had diverted towards the sea.”

According to French news outlet Ouest-France, some sources said that the Piper Malibu plane had been experiencing difficulties taking off from the airport in Nantes, and had to make three or four attempts before getting into the air. Frédéric Solano, who is in charge of the case, stated that this was unconfirmed.

“I cannot confirm this information, and in any case, there will be an investigation like there usually is with this type of disappearance,” he stated

Solano also stated that after taking off from Nantes airport, the plane “disappeared from radar screens 15 minutes later, while it was over British waters.” However, according to coastguards that spoke to BBC Mundo, the plane wasn’t lost in British waters or water under British control, although British authorities are helping in the search for the missing plane.

John Fitzgerald, director of operations for Channel Airline Airsearch, the company that heads up aerial accidents over the British Channel, explained that if the plane had crash-landed into the sea, then the prognosis is not good.

“If they are actually in the water, I would say that there are no chances of finding them alive,” he told Todo Noticias.

The search for the plane had to be called off on Monday night due to adverse weather conditions, with strong wind causing waves of up to two metres. It began again at 8 a.m. on Tuesday morning, when the sea was calmer, although Clarin reported that the visibility had been deteriorating throughout the day.

According to BBC Mundo, Sala’s father found out the news from a friend.

“I can’t believe it,” he said between sobs. “I’m desperate. I just hope everything turns out ok.”

His mother, Mercedes, also said that she was in shock, and that “everything seems unreal.”

‘Emiliano Salas started his football career in Argentina, but moved to France when he was 16 and started playing in the Girondins de Burdeos before moving to Nantes in 2015. He has already scored 12 goals in this first half of the season, and had stated that he was extremely excited to start working with Cardiff City.

? @EmilianoSala1: "I can’t wait to start training, meet my new teammates and get down to work."