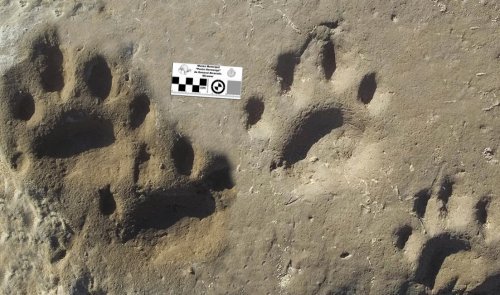 In the health spa resort town of Miramar, 280 miles south of Buenos Aires, people wander along the promenade and children play in the sea. Thirty thousand years ago, however, it was a very different picture.

Scrub prairies and coastal lagoons were inhabited by giant land-bound sloths that weighed a couple of tons each, along with massive armoured mammals related to the armadillo, birds a metre tall and the majestic sabre-toothed tiger, or Smilodon.

Paleontological groups discovered fossils of the pawprints of the feline carnivore in the touristic centre of Miramar which give many clues about the little-known animal, reported CONICET.

“The discovery of pawprint fossils is very rare and an unusual event in any paleontological investigation,” explained Doctor Federico Agnolín, one of the paleontologists who studied the fossils. “In fact, this is the first time that pawprints have ever been found from the sabre-toothed tiger.”

The group of investigators hail from the Azara Foundation, the Maimónides university, the Miramar Punta Hermengo Municipal Museum, the Argentine Museum of Natural Sciences and the National Board of Scientific and Technological Investigations (CONICET).

Although skeletal remains of sabre-toothed tigers have been found in the Miramar area, the pawprints allow scientists to learn much more about the animal’s habits and lifestyle.

“These prints show that the Smilodon was an animal that had adapted to walk long distances in these pampas plains,” explained Agnolín. “As well as this, they show us that the front extremities of the Smilodon were very wide and strong, much more than the back. This occurs in animals who are not good runners and who, conversely, attack their prey through ambushes. The Smilodon would wait hidden in the path of a large mammal. In the case of any distraction, the sabre-toothed tiger would throw itself on its prey and knock it down in order to then hang onto it with its back legs and finish it off driving its sharp canines into it like knives.”

The town of Miramar has been renowned for its rich paleontological history since the 19th century, but the Smilodon is the first to receive a special honour related to the geographical location of its discovery.

“The new ichnospecies was scientifically baptised as Felipeda Miramarensis, in honour of the city where it was found,” explained Daniel Boh of the Punta Hermengo Museum.

In part due to this discovery, along with many others in the fossil-rich area, CONICET reported that there are plans to create a new museum of natural sciences in Miramar.