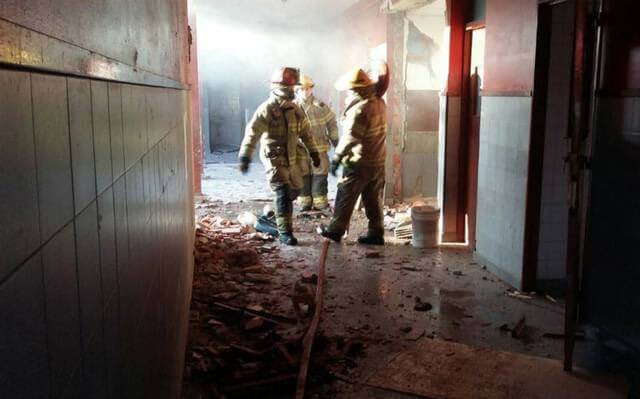 Early Thursday morning there was an explosion at a primary school in the city of Moreno, Buenos Aires province, killing a teacher and a kitchen worker.

The explosion, caused by a gas leak, took place between 7.20 and 7.40 a.m. destroying the teachers room and the adjacent corridor. The vice-director Sandra Calamano, 48, and cook Rubén Orlando Rodríguez, 45, were found dead on site. It is as yet unknown if the causes of death were due to the explosion, the collapse of the building or the inhalation of gas.

“It wasn’t a bigger tragedy because the kids come in 15 or 20 minutes later,” explained a source to Clarin. “If not, we would be looking at a disaster.”

The head of Moreno Firefighters, Ariel Barcala, confirmed that the explosion was due to a heater that was fed by bottled gas.

“There was an explosion due to the volume of gas in a meeting room […] which caused the collapse of the structure,” he told news source La Patilla.

Soon after the explosion, teachers, parents and members of education trade unions surrounded the site. Those present explained to Clarin that they had noticed the smell of gas over the last few days, and six to eight reports of this had been made. In response, the school had arranged for the School Board to visit the school on Wednesday evening to check the building.

“They came […] they checked, and they went.” the teacher said.

This has caused widespread consternation among teachers and parents, and the heads of two education trade unions, Roberto Baradel (Suteba) and Mirta Petrocini (FEB) visited the establishment. On leaving the building they announced a 24-hour strike on Friday for the whole Buenos Aires province.

Baradel explained to the crowd that public schools are in such a bad state because “government official’s children go to private schools.”

He went on to denounce “the abandonment, the apathy and even the corruption that there is in the school system in the province when it comes to infrastructure.”