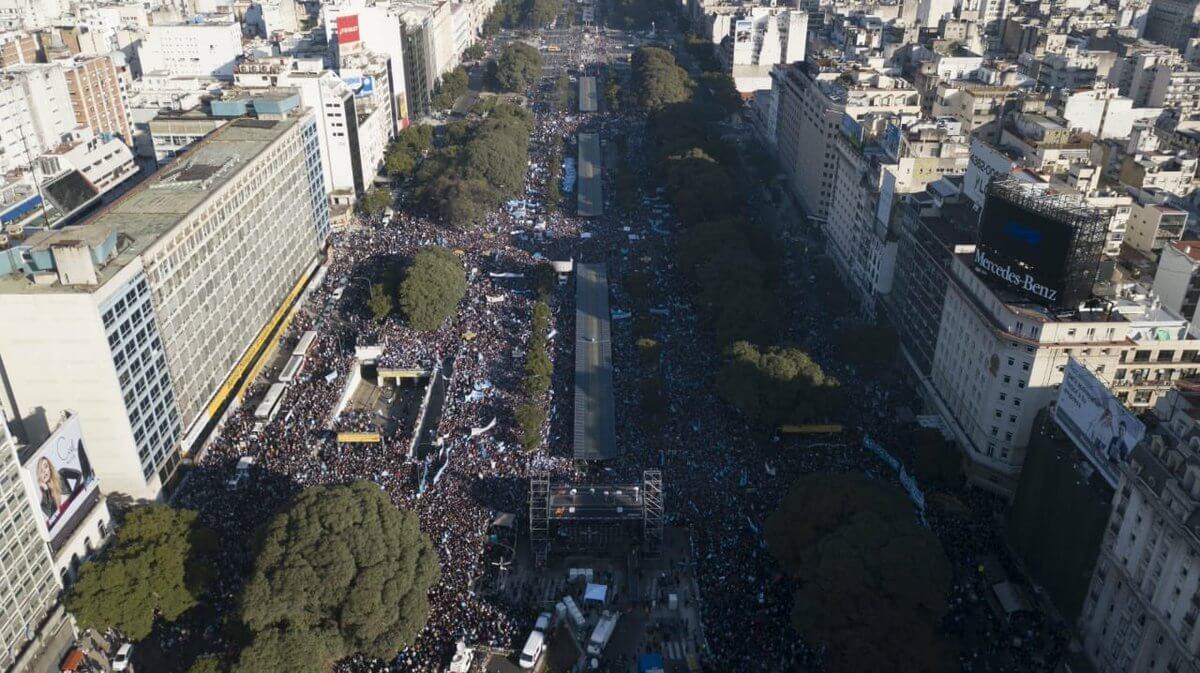 This morning thousands of people across the world were surprised to find the full back cover of the New York Times to be bathed entirely in green in support of legalising abortion in Argentina. The final vote goes to the Senate tomorrow, but can international pressure change the minds of Argentine Senators who are voting to represent the wishes of the Argentine population?

The New York Times back cover was printed in 134 countries, and features a picture of a coat hanger, which are sometimes used in order to illegally induce an abortion. The word “Adiós” is written above the image, and underneath a direct call to the Argentine Senators to vote for the proposed ruling. A social media frenzy ensued, with New York Times being the third most popular trend on Twitter and many voicing their pro-choice support.

“Complications from unsafe abortions are the leading cause of maternal deaths in Argentina.

On August 8, Senators in Argentina could choose to change this if they vote through a bill to decriminalise abortions.

The world is watching.

The page was commissioned by Amnesty International, which recently has been increasingly vocal in its support of legalising abortion. The Washington Post also printed an article by Amnesty International’s executive director Mariela Belski, which placed abortion as a direct violation of women’s rights. Belski was also published in The Irish Times in an opinion article welcoming Argentina’s vote and lauding the Irish government’s recent decision to separate religion from politics and allowing a referendum that legalised abortion in the country.

“Recognizing and defending the rights of women is a necessary step to become a modern democracy once and for all,” she wrote.

Human Rights Watch has also stepped up to show its support for the legalising abortion, with recent campaigns both for Argentina and Brazil.

“The criminalisation of abortion imposes a discriminatory burden on women and girls and puts their lives and health at risk,” said José Miguel Vivanco, Americas director at Human Rights Watch on their website. “The Argentine Congress has a critically important opportunity to protect the rights of women and girls by ending this unfair and harmful status quo.”

Best-selling Argentine author Claudia Piñeiro also wrote an pro-choice article in Time magazine Tuesday explaining that the massive mobilisation of protestors that have taken over cities with their emblematic green handkerchiefs have aided a freer discourse about abortion.  Around 500,000 clandestine abortions are estimated to take place every year, and are the leading cause of maternal deaths in the country. This large number means that women are no longer as afraid to admit to having undergone a clandestine abortion, despite the possible four-year prison sentence.

“In this way, we have learnt that the degree of separation to reach a woman who had undergone abortion is minimal,” she wrote.

These international organisations are staunchly on the pro-choice side of the fence, and although their research is thorough, it is difficult for them to understand the Argentine society that has criminalised abortion for so long. Piñeiro describes how international friends are shocked when they hear of Argentina’s rigid laws regarding abortion; They expect ‘the Paris of Latin America’ to be more forward thinking and more liberal.

However, it is undeniable that the Catholic Church plays a leading role in both Argentine society and legislature. The country’s constitution itself recognises the right to life from the moment of conception, which has been a strong argument against the proposed ruling.

This was been seen in the Pro-Life march last Saturday, which was attended by 650,000 people. One of the main organisers of the event, Pastor Osvaldo Carnival, spoke to Evangelical Focus, saying that the march was “to make that voice of the unborn heard.”

“It does not matter what your political ideology is,” added Pastor Paula Delvecchio. “This is about crossing the line between life and death. For the evangelical people represented here, this line is not negotiable.”

There has also been widespread rejection of the potential measure from some doctors and nurses, who have led protests with banners proclaiming “I’m a doctor, not a murderer.” The new legislation would require all hospitals in the country to provide abortions, although does allow for individual conscientious objection. However, it is worth noting that many of the hospitals in the country are affiliated with the Catholic church and completely dismiss the possibility of helping a woman abort her child.

“How far are we willing to go? Jail,” said Ernesto Beruti, the chief of obstetrics at the Austral University Hospital, which is linked to the Catholic Opus Dei Movement. “Even if the law is passed, I’m not going to eliminate the life of a human being. The most important right is the right to live.”

For those abroad and for many living in Buenos Aires, where the pro-choice movement is most outspoken, the support for the legislation of abortion seems so strong that it is almost unthinkable that the bill won’t be passed. International organisations claiming that current abortion legislation is against human rights obligations is a worldwide attempt to shame the country into concurring with their demands and their beliefs.

However, for a country where the right to life from conception has been ingrained in society for generations,  legalisation of abortion is much more revolutionary that it appears. Pro-choice movements in similarly-Catholic Brazil have incurred death threats against activists like Debora Diniz, who temporarily went into hiding under police recommendation before speaking at a hearing. In her opinion piece, Piñeiro claimed that the closeness of the vote and the possible victory of the pro-life movement is due to the Catholic Church’s deep seated fear of female desire. The Church sees women as mothers, to “be fruitful and multiply” and at the heart of the issue is the sexuality of women and their right to choose not to conform to the traditional female role of a mother, she argued.

Some Senators, such as Juan Carlos Romero, have expressed that they are voting against the bill, not necessarily because they agree with the decision, but because it accurately reflects the wishes of the people he is representing.

Currently, half of the Senators have said that they will vote against the bill, which with one abstention and one absentee would mean that abortion regulations will not change. Things could change at the last minute and due to the tiny margin between the votes, even if abortion is not legalised this year, it has opened the topic up for discussion to, removed the stigma, and this will not be the last we see of it in Argentina.