Violence erupts both inside and outside Congress during budget debates 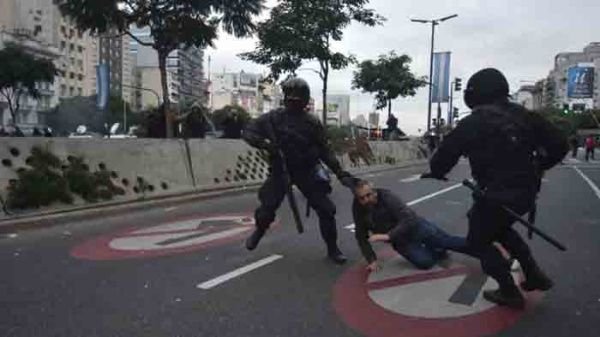 Violence has broken out both inside and outside Congress during the debates on the controversial 2019 budget, with MPs pushing and shouting as well as protesters throwing rocks.

Outside Congress, reported Clarin, a group of hooded individuals attempted to knock down the barriers put in place whilst also throwing rocks and hitting public property with sticks. The police have responded with tear gas, rubber bullets and fire trucks in an attempt to disperse the attackers, and 27 individuals have been arrested thus far.

Activity on Twitter under the handle #Congreso imply that those resorting to violence are a small minority, and not a true representation of the generally peaceful protest occurring outside the governmental building. However, videos across social media of arrests and what was presented as police aggression caused uproar both outside and inside the Congress building.

Elisa Carrió, head of the Macri-led political coalition party Cambiemos, responded to Kirchnerist accusations of police repression by criticising the Front for Victory (the Kirchnerist political party the attackers are presumed to be supporting) of “attacking democracy.”

“The FPV are attacking democracy by stopping the Congress from functioning,” she said. “The crowd was dispersed with a hydrant which is absolutely legal. There was no repression, but there was destruction of public goods by the demonstrators. A lawyer should take immediate action due to the destruction.”

Also during the debates, MP Victoria Donda displayed a full-size cardboard cutout of International Monetary Fund (IMF) leader Christine Lagarde and other Kirchnerist MPs handed out American flags, chanting “Patria si, Colonia no” (Yes to our country, No to being colonised).

According to reports from Twitter, FPV MP Daniel Filmus and PRO president Nicolás Massot, had to be physically held back to avoid the two men coming to blows, with the Kirchnerists accusing Massot of asking them to “come out and fight.”

The session has been paused for the fourth time in order to meet with the Buenos Aires head of security to discuss the violence outside Congress walls, but the debates are not expected to end anytime soon.