Carnaval in Jujuy is a hidden gem 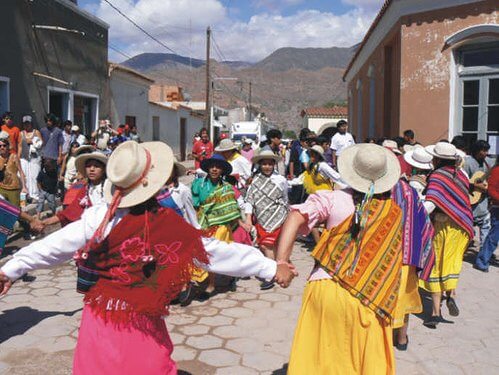 As you travel north by road from the lush, colonial hub of Salta, you may easily mistake the multicolored province of Jujuy for looking like Bolivia or Peru. Located in that country’s remote northwest corner, the valley is filled with adobe pueblos inhabited by dark-skinned, Quechua-speaking peoples who have inhabited the region for at least 10,000 years.

Archeological remains dot the province where the Quebrada de Humahuaca ravine is the central vein that runs throughout. The Quebrada was carved into the sedimentary Andean rock about 2 million years ago by the Rio Grande river. This cactus-studded ravine has been a natural highway between the high Andes Mountains of modern-day Chile and Bolivia and the low pampas plains of Argentina since the first settlement in the area around 9,000 BC.

Vicuña, guanaco (both relatives of the llama), eagles, and condors all call the Quebrada their home. Due to its location at a physical and historical crossroads, and the breathtaking natural beauty of its mountains and valleys, it was designated a UNESCO World Heritage Site in 2003.

It’s not simply for the natural beauty that the Quebrada de Humahuaca makes its name, however. Every February, while the more famous Carnaval is happening in Rio de Janeiro, the province of Jujuy hosts its own celebrations, known as the Carnaval Jujeño. A brilliant mix of indigenous and Catholic customs, these colorful celebrations were first brought here by the Spaniards over four hundred years ago.

The ritual consists of the disinterment of a figure representing the devil, known as the pujllay. This symbolic meeting between the underworld and the human realm represents a time for the inhabitants of the Quebrada to let loose and shun social norms for a time. The subsequent party lasts a full nine days, with locals wearing masks and costumes representing the devil, playing live music, drinking chicha, chewing coca leaves, and dancing until dawn.

As the celebrations come to a close, the pujllay is buried again, and the path between the underworld and human world is closed for another year.

Music is an integral part of everyday life in Latin America, and Jujuy is no exception. The focal point of Carnaval is dance, fueled by Andean pan-flute music, as well as the folklore of the Argentinian gauchos.

Los Nocheros is one of the most popular bands in this region, as one of the first bands to combine Argentinian folk-music with the modern sounds of the electric guitar and synthesizer, they bridge generation gaps with their unique fusion. With Carnaval Jujeño in full swing, Los Nocheros played during a downpour Sunday night at a festival in the capital of Jujuy, San Salvador. The rain did not prevent the thousands of adoring fans from singing every word, in celebration of the disinterment of the devil and, with it, the commencement of over a week of festivities.

The culture of Jujuy is a fusion of European and indigenous rituals, all set in a landscape of a raw geological splendor and populated by a soft-spoken, warm people who will not balk at inviting you into their home for a meal and a cup of tea after a long conversation. Jujuy, and the Quebrada de Humahuaca, will leave you so enraptured that it might be difficult to move on to your next destination.