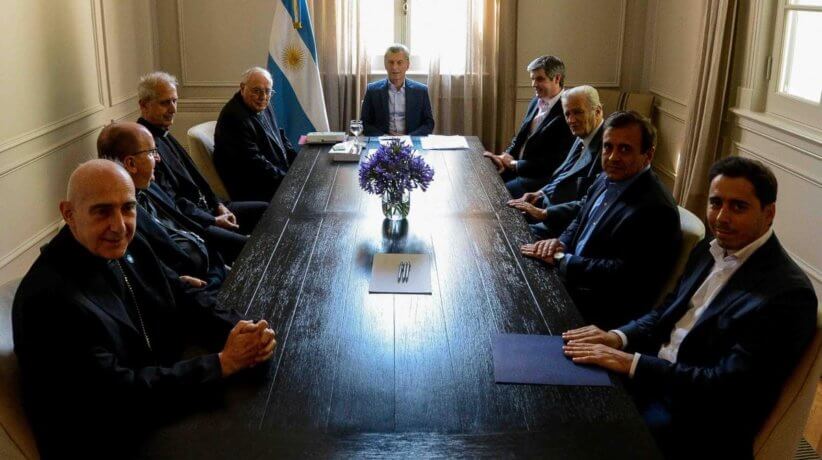 The relationship between President Mauricio Macri’s administration and the Catholic Church took yet another frosty turn as the religious entity announced that it would renounce a portion of the state funds awarded to them.

El Destape reported that this decision was made in the 116th Plenary Bishop Assembly in which Bishops from all over the country took part. However, the decision will not be finalised until after a meeting in Pilar that starts today, Monday Nov. 5 and ends on Friday.

The abortion debates that started earlier this year were a catalyst for the distancing between the government and the Catholic Church, and in August the Episcopal Conference announced the creation of a commission to analyse the gradual renouncement of public funds and explore other funding alternatives.

Further controversy was created in October, when the head of the Trucking trade union, Hugo Moyano, participated in a mass to ask for “Peace, Bread and Work.” The mass was led by the Archbishop of Mercedes-Luján, Agustín Radrizzani and was a statement by the Catholic church that they, too, were not in agreement with Macri’s austerity policies.

Clarin highlighted that the $140 million pesos (nearly US$4 million) that the Church received in 2018 only forms 7 percent of the ecclesiastical budget, but it has strong political significance. However, the Catholic Church will still accept subsidies for Catholic schools, as the government gives subsidies to other schools of different religious backgrounds.

The role of the Catholic Church in Argentine society has traditionally been a strong one, but events over the last six months spurred by the abortion debates have meant that many have called for a clearer separation between church and state. In 1966, the Concordat between the Holy See and the Argentine State was signed, meaning the president no longer chose who was to be bishop, and instead he or she only had the right to object the appointments managed by the Catholic Church. In 1994, a reform of article 2 of the constitution eliminated the necessity for a president to be a Catholic, although maintained the need for a government to “sustain the Catholic faith.”

Love thy neighbour (unless it’s Argentina)