Free festival on Saturday in support of fired Telam workers 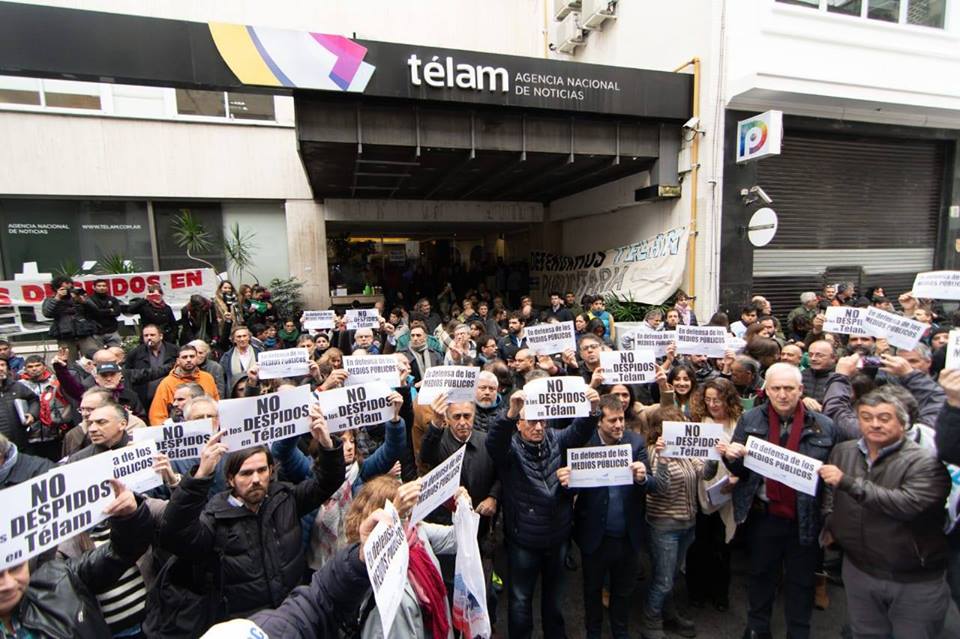 This Saturday Jul. 28 there will be a free festival in support of the hundreds of Telam workers fired at the end of June this year.

The festival will take place on Avenida Belgrano and Defensa in front of the Telam headquarters from 2 p.m. until 8 p.m. with 10 music groups such as Acorazado Potemkin, Andrea Álvarez, Me Darás Mil Hijos, La Perra que los Parió and Willy Crook, among others detailed on the Facebook event.

State press agency Telam laid off over 350 workers in an attempt to rid themselves of Kirchner-era corruption and journalists who “confused journalism with pro-government propaganda,” explained the communique published on the Telam website.

A month later and despite the workers carrying out a continued peaceful occupation of the Telam headquarters, no jobs have been reinstated, despite support from lawyer Gabriel De Vedia and many others, creating the hashtag #SomosTelam (We are Telam).

The event is an attempt to maintain awareness of the unfair way in which the workers were fired. Silencio affirmed that it was not just journalists who lost their jobs, but also photographers, correspondents, admin workers and publicity workers. This caused widespread outrage as the man responsible for the layoffs, Head of Federal Media Hernan Lombardi posted on Facebook saying that his actions mean that “journalism had won.”

In a hopeful move, yesterday July 24, Ariel Bargach from the Ministry of Work announced to La Capital that the Ministry will meet the Press Worker’s Trade Union (Sipreba) for the third time.

“There was a first meeting with all the trade unions, where the agency didn’t bring the list of those who had been fired or the last balance sheets,” A Sipreba representative told the news site. “[There was] a second, smaller meeting, and now we hope that they will give us a third meeting.”

The music festival is not the first time that a free event has been organised to raise awareness for the Telam ex-employee’s plight. There is an ongoing free cinema festival that takes place on Friday evenings in the entrance hall of the Telam headquarters that started on July 6 and is set to carry on throughout July and August.

The mass job losses in Telam sit in a context of various austerity measures President Mauricio Macri has been putting in place, which have seen 6000 state employees to lose their job and for salaries to be frozen. Despite the many protests that have taken place over the last month, it remains to be seen whether the Telam workers will have their jobs reinstated.