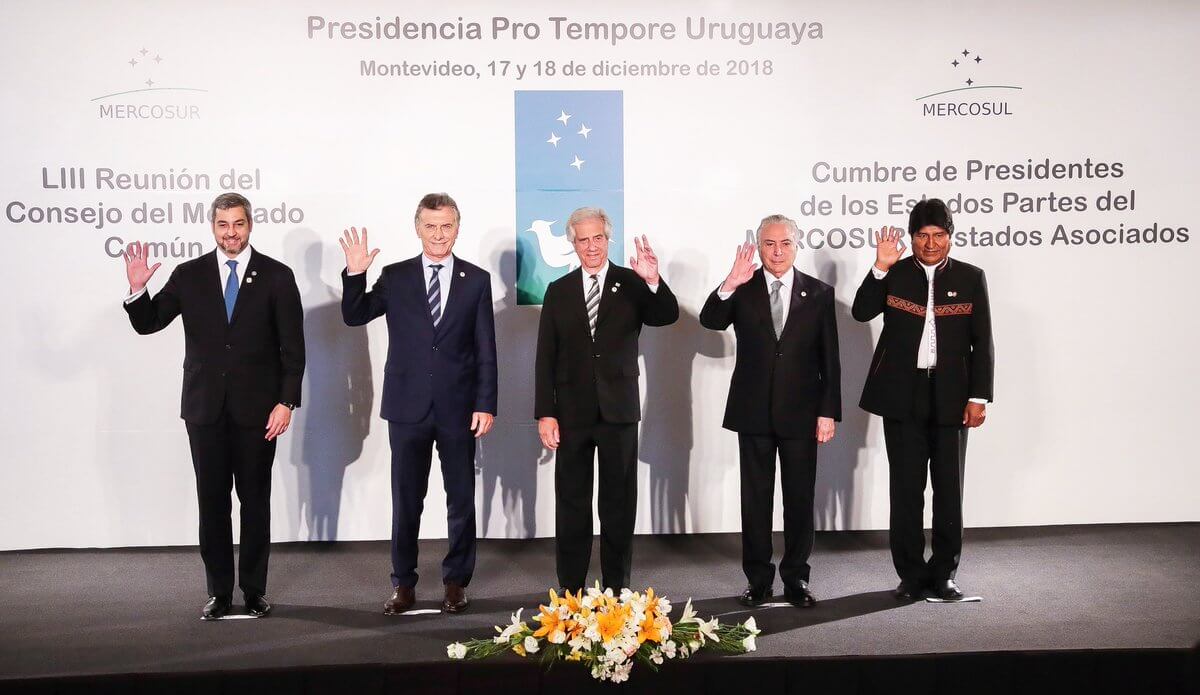 Argentine President Mauricio Macri was named President of MercoSur today, December 18, a position that he will hold for the next six months.

Taking place in Uruguay, the event comes straight off the back of the 53rd Summit of the Mercosur Heads of State and Associated States that was also hosted in Uruguay by the country’s President Tabaré Vásquez.

Although this isn’t the first time Macri will hold this title – he was also president in the first six months of 2017 – he will be dealing with three main issues associated with the trading bloc.

The first is the soon-to-take-office Jair Bolsonaro, who will be inaugurated as Brazil’s president on January first, the same day Macri assumes his presidency of MercoSur. Perfil reported that concerns were raised when Bolsonaro’s appointed Finance Minister, Paolo Guedes, who is set to inherit all economic responsibilities, stated that MercoSur would not be a priority for the incoming president.

Another problematic issue will be the ongoing crisis in Venezuela which has displaced millions of Venezuelans fleeing from food and medicine shortages in their native country. The Lima Group, which was created with the express purpose of dealing with the crisis, has talked about hardening their stance towards Venezuelan President Nicolas Maduro, by removing embassies and creating an economic bloc in Caracas.

However, Infobae reported that from what Argentine Chancellor Jorge Faurie said on Tuesday, it appears that Macri will be taking a softer approach to the crisis, with a strong tendency towards dialogue and political cooperation. Previous Macri has spoken out against stronger policies, stating that those who would be most harmed by these would be the Venezuelan citizens themselves.

The third thing Macri will be attempting to achieve is the finalisation of the free trade agreement with the European Union, which has been going back and forth unfinished for decades.

Faurie mentioned that the Argentine president will also seek to close agreements with EFTA, which comprises of Norway, Switzerland, Lichtenstein and Iceland, as well as Canada, Japan and the ASEAN bloc of Indonesia, the Philippines, Malaysia, Singapore, Thailand, Vietnam, Brunei, Cambodia, Laos and Myanmar.

MercoSur was created in the early 90s between Argentina, Brazil, Paraguay, Uruguay and Venezuela in order to increase trade within the five countries. Venezuela has been temporarily suspended from the group due to disagreements with his management of the Caribbean country, but Brazil’s current President Michel Temer and his Paraguayan counterpart Mario Abdo Benítez were present for the handover of the MercoSur presidency.