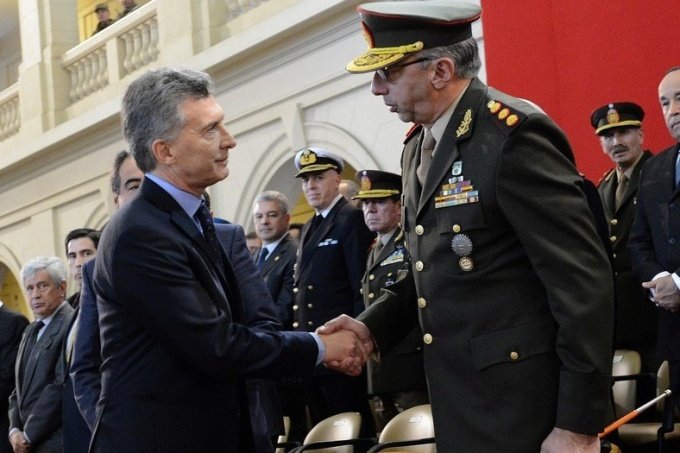 President Mauricio Macri’s changes to the role of the armed forces in Argentina have sparked debate and widespread outrage from opposition parties and human rights activists.

Macri has made changes that allow the military to play a larger role in internal security affairs in a bid to fight against drug trafficking and terrorism. This includes modifications to the 737 decree put in place during Néstor Kirchner’s presidency that only allows the army to act in aggressions from other state’s armed forces. Now the decree states that the military can be used “in a persuasive or effective way in aggressions of external origin,” and will collaborate with existing security forces such as the police and the gendarmerie to ensure the safety of Argentine citizens.

The current Defence Minister Oscar Raúl Aguad expressed his approval for these changes in an interview with La Nacion, in which he explained that the previous decree was out of date.

“The threats have changed,” he told the Argentine newspaper. “The state-state war doesn’t exist anymore. Today enemies can be different organisations, military or not. Attacks could take place in cyberspace.”

However, many opposition leaders and human rights organisations have been vocal in their rejection of the new measure. Argentina has historically had a difficult relationship with the military, with six presidents removed from power in the 46 years between 1930 and 1976, finishing with a brutal military dictatorship that only ended in 1983.  The 737 Decree was created to lower the risk of military coups and put the military under civilian control.

Kirchnerist political coalition Unidad Ciudadana, headed by ex-defence minister Agustín Rossi, maintained that the new law is unconstitutional and should be debated in congress before allowing it to take effect.

“Since 1983 there has been a state policy to separate national defence from interior security,” the political group told Todo Noticias. “This [new law] demands the modification of three pyramidal laws of Argentine democracy; Defence, Interior Security and Intelligence.”

The Frente Renovador leader Felipe Sola tweeted that the reform was a “grave error” and hadn’t been passed through any of the six commissions in the upper house related to Defence and Security.

“If they want to reform the armed forces and abolish the existing laws, let them come and debate it in congress,” Sola said in  conversation with radio programme Cronica Anunciada. “The armed forces are not prepared to work in interior security, this is tragic for the country.”

It’s not just the political opposition that are reacting negatively to the reform. Nobel Peace Prize winner Adolfo Pérez Esquivel claimed that it violated interior security and defence laws, saying that “again [there is] an illegal policy to damage our democracy.”

“Until now there has been no dialogue with the government, this has to do with the IMF policies, and with the presence of American military,” he told Radio Urbana. “This is the re-colonisation of the country.”

Todo Noticias  reported that the Coordination Against Political and Institutional Repression (CORREPI) accused Macri of “systematically denying the state terrorism of the last military dictatorship and seemingly favouring the freedom of genocide.”

Macri first mentioned possible changes to the armed forces when he first came into power in 2016, and a report by Wilson Centre shows that Argentina have increased spending in the military sector since his presidency. The rise was minimal; from 0.86% of the national GDP in 2015 to 0.96% in 2016, which means it remains one of the lowest in the world. However it bucks the trend in the area, with Colombia being the only other country that increased military spending that year.

The Argentine armed forces also received a 20% pay rise recently, making them one of the only state organisations that didn’t have their salaries frozen by the austerity measures being carried out due to the IMF loan.