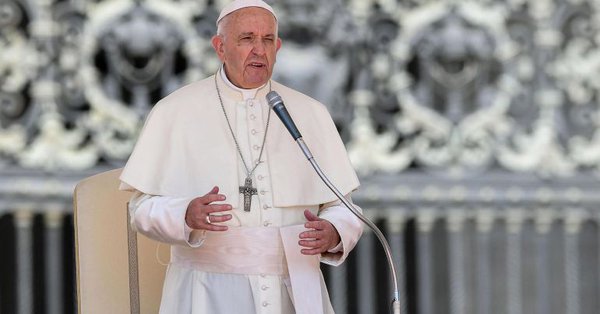 Argentinian Pope Francisco has had a controversial week and he has made comments on abortion and the media that have caused some to question whether the religious figure is criticising the Argentine government directly.

Just two days after the legalisation of abortion was approved, the Pope was reported in Clarin linking abortion to Nazism.

“Abortion is fashionable, it’s normal,” he said. “When someone sees during a pregnancy where the child isn’t well, or it comes with something extra, the first thing people say is ‘Shall we get rid of it?’ It’s the same thing the Nazis did, just with white gloves.”

This less-than-subtle allusion to the Holocaust caused widespread uproar throughout the country which has been overtaken by the abortion debates in the last couple of months.

“All dictatorships have started like this, altering the methods of communication, putting information in the hands of one person who has no scruples.”

The majority of Argentina’s media organisations are privately owned with public organisations much weaker in comparison, according to Digital News Report. They went on to affirm that media regulations are often politicised, and Freedom House labels Argentina’s press as only ‘partly free.’

However, sources from the Vatican are denying that the Pope is making any concerted attack against Argentina, and that people are taking quotes out of context and misinterpreting them.

“Francisco is not in a fight with the Argentine government,” a source who spoke to the Pope told La Nacion. “Whoever sees it like that is falling prey to misinterpretation.”

In regard to his speech on abortion, the Pope wasn’t referring to all abortion practices, a spokesperson clarified.

“While talking to a network of 500 associations that took part in the Family Forum, Francisco referred specifically to selective abortion, due to malformations, which is permitted in some European countries,” he explained to La Nacion. “[This is] a method of selection that is similar to that implemented by the Nazis. He didn’t say that a woman who carries out an abortion is a Nazi.”

As to his comments on the media, Pope Francisco has always shown his preoccupation for the issues surrounding the media such as fake news and political control over the press, but maintains that his comments weren’t directed at Argentina specifically.

“Behind this interpretations there hides – in some media and in some pro-government political forces- the attempt to trivialise the figure of Francisco,” a source told La Nacion.