After 18 hours of debate, the budget plan scrapes an approval 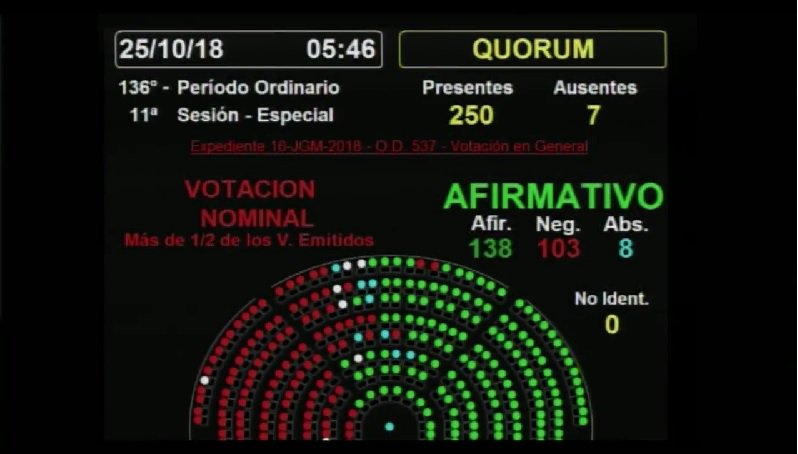 After a marathon session of debates that lasted 18 hours, Congress approved the proposed budget plan for 2019.

With 138 votes in favour, 103 against and eight abstentions, Mauricio Macri’s government managed to just approve a measure that had experienced a huge amount of resistance from opposition parties. With a majority of votes, the legislation will now pass to the Senate where it will be discussed on either Nov. 14 or 21.

The debates were meant to start at 11 on Wednesday Oct. 24, but they were delayed by half an hour as initially there were not enough MPs in the room. The 18 hours of debates were plagued by lost tempers, a life-size cardboard cutout of IMF director Christine Lagarde, and two men almost coming to blows. As if that weren’t enough, outside Congress walls, small groups of violent protesters threw stones and knocked down barriers, causing police to resort to tear gas, rubber bullets and fire engines.

Todo Noticias reported that the majority of the protesters who contrasted with the generally peaceful demonstration pertained to either leftist or Kirchnerist political inclinations. Over the course of the day 26 individuals were arrested, although they were later released, and nine people were injured.

This has never been a popular initiative, and Kirchner and leftist political parties remained non compliant with the new measures.

MP Axel Kicillof from the Justicialist Party (PJ) called Macri’s government “a complete failure,” and dismissed the current government’s justification of the economic crisis by blaming it on previous administrations. “Enough excuses, you have had three years in government and you have broken everything.”

Leader of Evolución party, Martín Lousteau also criticised the budget, but admitted that he would vote for it as it was the lesser of many evils.

“There are alternatives,” he explained. “Eliminating unnecessary spending, limiting privileges, but that is not what we’re doing now. Not voting for the budget is worse, not better. It seems grotesque, but we are going to go with it because we want to discuss certain things. There’s enough money, but it’s being spent badly, much of it is going due to corruption.”

“In the 2019 budget, the importance of debt services and social security go up, while less value is placed on science, education and health.”

Macri’s government had to make some important changes to the proposed budget plan in order to both get quorum in the Congress and to try and get a majority vote.

They changed the pension law, and allowed single-system taxpayers to continue receiving the PUAM (a loan given to those over 65 who have no retirement or pension plan), although all pension plans were limited to people over 65 years old.

The controversial article 53, which would have allowed the government to carry out financial operations with public debt, had to be removed from the bill due to its widespread unpopularity.

However, the budget plan for 2019 does include a 0.5 percent fall in economic activity, a 1.6 percent fall in private consumption and a big 9.7 percent drop in investment. The proposal also hopes to get an average currency value of 40 pesos to the US dollar and hit 23 percent inflation.

With just a 35 people sitting between approval and failure in the Congress, it remains to be seen how the Senate will deal with the budget proposal.