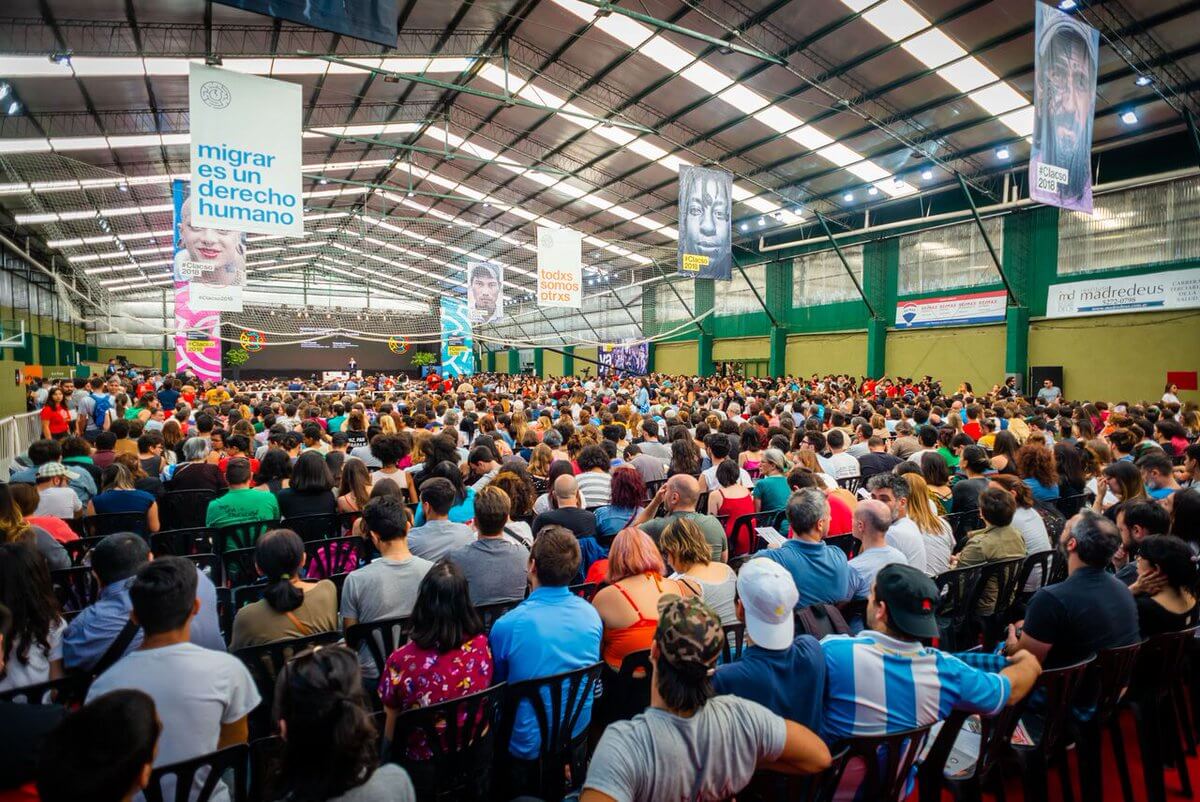 Buenos Aires is currently playing host to the eighth Global Forum of Critical Thinking (CLACSO), and Monday November 19 saw ex-presidents Cristina Kirchner and Dilma Rousseff give speeches on the state of politics in their respective countries, Argentina and Brazil.

The CLACSO Conference has been hailed by some as a counter-summit to the G20 meeting, which will be held in the Argentine capital at the end of the month. However, after walking on stage to a wave of applause and chants, Kirchner dispelled this theory, stating that the conference served as an opportunity to express a variety of different opinions.

READ MORE: Patricia Bullrich on preparations for the G20: “We recommend that you leave Buenos Aires.”

“We, as a progressive space, should get used to not presenting ourselves as against,” Kirchner explained. “But rather as a political and social space that surpasses the categories of left and right, to move definitively into a new category of thinking, that of the people.”

Since the election of Jair Bolsonaro, the ultra right-wing president-to-be of Brazil, the question of democracy in Latin America as a whole has come to the forefront. Historically the continent has fluctuated from far-right military governments to revolution-tinged leftist ones, and recent elections hint that the pendulum could be swinging back again.

Added to a continent-wide growth in disassociation with the world of economics and politics, citizen support of democracy is at a low point, resulting in a fall in the quality of the democracy. El Pais affirmed that across Latin America, only 5% of the continent’s population believe they live in a full democracy, and that society is moving away from a blind support of old ideologies (left and right) to focus on pragmatic policies that will actually benefit citizens.

Kirchner supported this idea of moving away from the black-and-white political world of left and right.

“Thinking like that only serves to divide and to be useful for neoliberalism,” she said. “We need to get rid of this way of thinking about the left and the right to conceive and coin a new category.”

Neoliberalism strikes fear into the heart of many a Latin American. In the 90’s Argentina, Brazil, Peru and Venezuela adopted the neoliberal “Washington Consensus,” a formula created by the World Bank. However, although it had shown some positive results in countries such as the US and Europe, it didn’t sit so well within Latin America, whose economies deflated as fast as poverty and unemployment skyrocketed.

The Argentine ex-president, who is currently under investigation for a plethora of alleged corruption charges, said in her speech that current president Mauricio Macri was voted in by promising a government and policies that he never fulfilled.

“What do you do when an elected government comes to power but does exactly the opposite of what they said they would do in their campaigns?” she asked. She added that the situation with Brazil was different, as unlike Macri, Bolsonaro was never afraid of voicing his often-controversial policies.

“What happened in Brazil is different, where it was explicit and they signed a social contract,” she said “Neoliberalism has meant that people can’t adequately identify what works well in government or in governmental policies. Here [in Argentina] we didn’t have the Brazilian phenomenon, even if we might have someone who just doesn’t have the lack of inhibition that Bolsonaro has to explain his ideas.”

“We don’t need to talk about percentages,” she said.

Rousseff, Brazil’s ex-president, was impeached in 2016 accused of corruption charges and manipulating the federal budget. However, she explained in her speech that her impeachment  was in fact a military coup with the objective to re-enter Brazil into a neoliberal structure, and that after the election of Bolsonaro, her country was “going down a tragic path.”

“[There is the risk] of leaving democracy to enter a neofascist type of neoliberalism,” she said, adding that the only way to combat the movements of the right in Latin America is through anti-neoliberalist and anti-fascist fronts.

In the run-up to Brazil’s presidential elections, Lula da Silva, ex-president of the Workers’ Party (PT), was banned from running as president as he was in prison serving a 12-year sentence for corruption. Before his candidacy was disallowed however, he was the clear front runner, and Fernando Haddad, who stood in his place, was unable to garner the same support as the charismatic left-leaning leader.

Rousseff stated that “it was unimaginable that in Brazil an extreme-right leader would win an election,” but that “banning Lula mobilised a candidacy [Bolsonaro’s] which supports the emergence of something that is latent in Brazilian society, which is the extreme right.”

She added that the extreme right, led by Bolsonaro “made it clear that they want to destroy us, but not just the PT but all the victories of social and workers’ movements in Brazil.”

El Destape reported that Rousseff was met on stage with applause and cries of “Lula Libre!” (Free Lula), the slogan that followed the PT’s attempts to have Lula run as a presidential candidate.

Today, Tuesday November 20, Brazilian presidential runner-up Haddad will also give a speech at the conference. The event ends on the November 23 and is taking place in the Ferrocarril Oeste area of the city. Attendance is expected to be high, as around 50,000 people have signed up for the event.