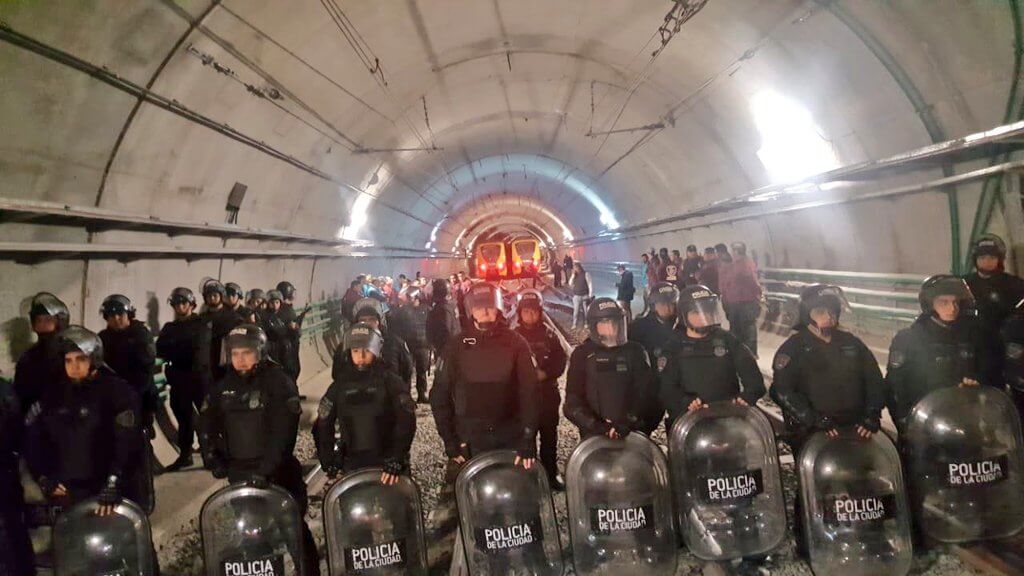 A strike closing two subway lines has escalated into a total closure of the subway as police detained a trade union leader and 15 workers.

The planned strike closed lines E and H and was planned to end at midday Tuesday. However, the situation escalated when police officers clashed with union members. According to La Nacion, transport company Metrovía tried to board the subway trains for an emergency service, but the workers threw themselves on the lines to stop them.

This caused the detention of the workers for laws 194 and 237, for impeding a public service and for using force against a police officer. One of the detained was Néstor Segovia, the leader of the trade union, who spoke to La Nacion before being taken away.

“Larreta is sending me to the police because I’m defending my fellow workers, because I’m arguing for equal rights,” he told the press. “They’re taking me prisoner for defending the pockets of my coworkers. I ask my subte colleagues that they don’t stop for Segovia, but for free equal rights.”

The subway workers have been striking periodically over the last couple of months as a Supreme Court ruling has prevented them from entering negotiations, say The Bubble. They want to negotiate a wage increase higher than the 15% agreed on earlier in the year.

Telam reported that the Trade Union Association of Subte and Premetro Workers (AGTSyP) said that the security forces used tear gas to repress the workers in the tunnel, and Segovia tweeted the same, but this has yet to be confirmed by police sources.

Roberto Pianelli, the general secretary of metro representatives told La Nacion that the strike would be in force as long as necessary.

“They leave us no other alternative than having to paralyse the subte,” he said. “Today, at midday there will not be a single functioning subte in the entirety of Buenos Aires until they let our co-workers go.”