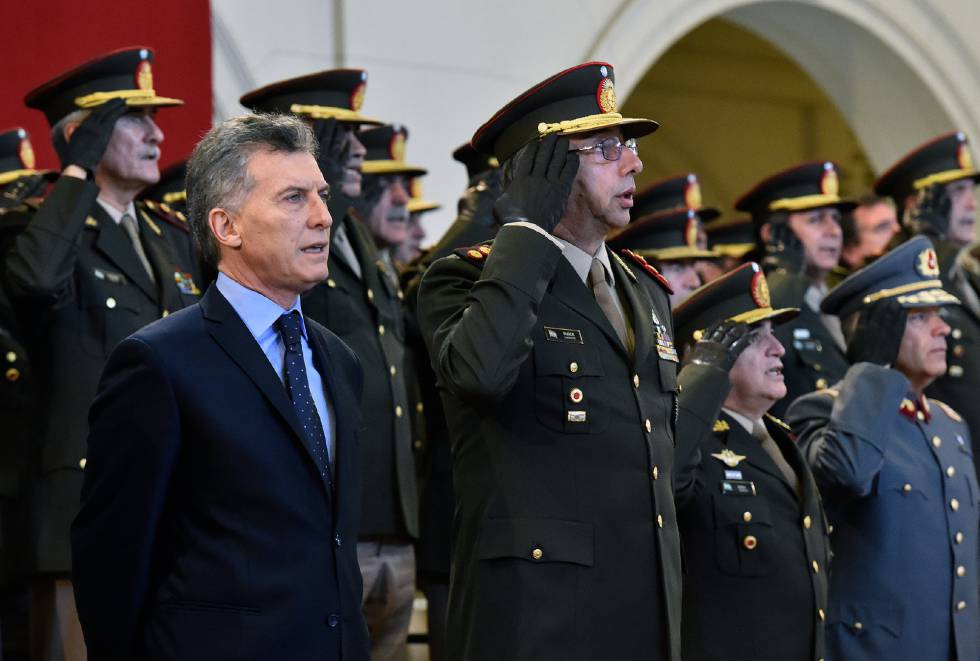 President Mauricio Macri is set to make profound changes to the Argentine armed forces and the laws that have limited their influence within the country until now.

Clarin reported that the president’s “profound reconversion” of the military will create joint groups of the armed forces, the armada and the aerial forces for the first time in Argentine history. He will also segment the country into north, centre and south areas, closing various barracks, and hopes the process will lead to the “incorporation of technology, and more training and workshops.”

Closing barracks across the country is not as drastic as it may sound, as these barracks have been in existence since before 1997 when military service was compulsory and the armed forces numbered 80,000, almost two thirds larger than the current number of 19,000. According to sources, Clarin reported that the military are supporting the plan. However, they worry that selling off barracks, some of which are in urban areas, could be “a property operation to acquire funds that will allow the reduction of the fiscal deficit, and not the sale of buildings to attain resources and modernize military equipment.”

Macri hinted at these changes on May 29, the Argentine Day of the Army, when he spoke to a military college, affirming that “we need armed forces who adapt to the necessities of the 21st century and who are prepared for the threats that worry us today.”

These changes could be linked to Macri’s recent decision to send military troops to the northern border of the country, which is to take place on Aug. 1 with a total of 4,000 soldiers being sent to dissuade drug trafficking in the region. Clarin reported that the Gendarmerie – a militarised police force in charge of internal security – who work primarily on the country’s borders, will be sent to the cities in order to manage the protests which are expected to rise as the government takes more austerity measures to reduce the fiscal deficit.

However, this suggests an end, or at least a modification, to the controversial 727 decree from 2006 which allows the use of the military against external threats, but severely limits it in cases of internal security. However, head of the army  Brigadier General Claudio Pasqualini spoke to InsightCrime suggesting that the military will wait for legal backing before taking action to avoid popular backlash or legal action.

“The military can’t, because of a number of norms and rules, perform security functions. It would take time to implement these kind of changes,” he said, adding that the military would likely wait for Congress to green-light the changes first.

Argentina’s complicated relationship with the military, exacerbated by past military dictatorships may be the reason they are treading carefully around this issue. Additionally, an unnamed source told Infobae that the presence of the armed forces at the northern border is purely a dissuasive measure.

“There will not be any direct intervention from the military bodies, but rather a strong Army or Air force presence on the northern front,” the source explained.

However, it is true that Argentina is facing threats that are vastly different from the traditional external menaces the army have historically dealt with, and Macri’s attempt to bring the armed forces into the 21st century is a response to this. Rut Diamint, a researcher at CONICET, agreed that the Argentine army is in need of an overhaul in order to  fight the organised crime groups that are menacing the country.

“Argentina is fighting a threat from the 21st century with models from the 19th century,” she told InsightCrime. “The country is no longer just a transit point, but a place of consumption and where criminal groups get organized, taking advantage of the lack of rules and the corruption in the security forces. What needs to happen is for the government to figure out what resources it needs to tackle the new threats it faces.”

The Argentine military forces have been hit by numerous budget cuts, which have affected their salary, the acquisition of new equipment and their ability to maintain current equipment. This caused the UK Defence Journal to declare that Argentina “ceased to be a capable military force” in 2017. The military protested against these measures on Independence day as they refused to carry out their traditional parade through the city, and Macri responded by giving them a 20% pay rise despite job losses and salary cuts throughout the rest of state sectors.

The army’s role within the country is changing and it is still not clear how exactly they will be deployed in order to protect the nation against the modern and changing forces that threaten it, such as terrorism and drug trafficking. However, Macri must be careful not to lose support from the military by putting them in situations that legally they are not authorised to be in.